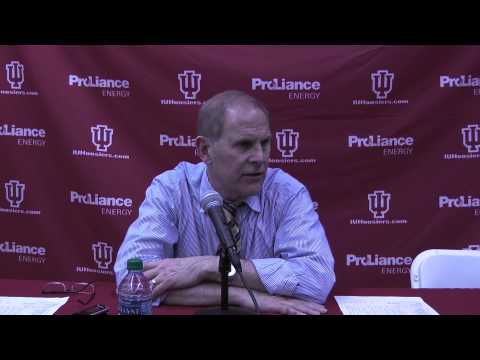 John Beilein met with the media following Michigan’s 81-73 loss to Indiana at Assembly Hall. You can watch the entire post-game press conference below using the embedded media player or read selected notes and quotes after the jump.


Opening statement: “Their runs in the game were really big. They have a large amount of experience, very talented. I’ve seen a lot of players, I don’t know if I’ve seen one quicker or faster, more athletic than Oladipo. It’s tough to stay in front of him. Several times when we were making those runs, he would get to the basket — he may miss, but that’s where (Cody) Zeller cleans up because Mitch (McGary) was trying to give help. Very few people can stay in front of that. So the difference was, they got to the foul line because they’re fast, they’re experienced and they’re talented. That was a big difference in the game if you look not at the officiating but at the fact that they got to the foul line, because that’s what they do.”