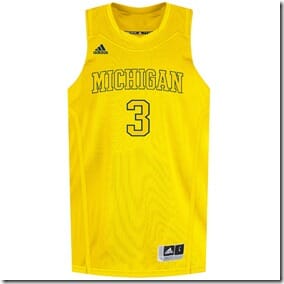 Michigan’s home game against Ohio State has been dubbed a “Maize Out” and the Wolverines will wear uniforms to live up to the billing. The Wolverines will wear a maize-on-maize edition of the Adidas “Bleed Out” uniforms that have been featured throughout college basketball (pictured above). Trey Burke also modeled the special edition all-maize shoes that Michigan will wear on Tuesday evening.

Ohio State will also be wearing alternative uniforms, branded as Hyper Elite by Nike, for Tuesday night’s primetime tip-off on ESPN at 9 p.m.

ESPN The Magazine has been following the Wolverines over the last several days and will publish a feature focused on John Beilein, Trey Burke and Nik Stauskas in its March 8th issue.