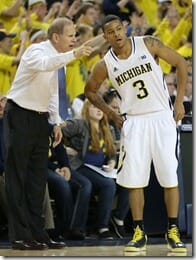 John Beilein joined the rest of the Big Ten basketball coaches on the weekly coaches teleconference on Monday morning. Beilein talked about how he’s preparing for Ohio State, who will possibly start at the five for the game on Tuesday and more. You can read selected notes and quotes below.

Opening statement: “We had a heck of a game down in Bloomington. It was a great atmosphere. We obviously came out on the short end but I’m proud of the way our kids battled after a rough start. We battled back a couple of times. A few breaks here and there, who knows what would have happened. But Indiana is a really talented, well-coached team playing in a great home environment and a great representative of the Big Ten. I hope we were, as well.”