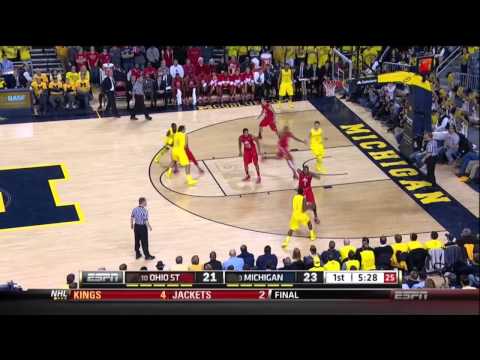 1. Mitch McGary dominates the first half

It sounds like a broken record at this point, but this sure felt like this was Mitch McGary’s best game to date. Against one of the more physical teams in the country, McGary played 29 minutes and logged 14 points, six rebounds, four steals, a block and one of the prettiest assists we’ve seen out of a Michigan big this season. It seems like every game, McGary has something new to show us. In a game that took everything Michigan could muster, McGary accounted for as many two point baskets as his teammates combined.  He scored 10 of his 14 in the first frame along with five of his six rebounds. He was a force in the paint and scored in a variety of ways. One thing Beilein has talked about as a big part of McGary’s development is body control and balance, and nowhere was that more apparent than on his first basket of the game. McGary rolls off a pick for Burke and Burke hits him with a great look, but as soon as McGary receives the ball, he finds Lenzelle Smith Jr. in his path, ready to take a charge. McGary recognizes this and jumps to his left, floating the ball over Smith for two points. It was a great play, and there’s probably no way he makes it even a month ago.  On the second play of the sequence, McGary simply beats Amir Williams for the rebound and powers the put-back through. On another pick-and-roll, Hardaway makes a terrific pass and McGary wisely passes up the dunk in favor of the easy layup. The Chesterton native is on the fast track to being an absolute force in this league, and as his stamina continues to improve, so will his playing time.

2. The freshmen get loose for 3-pointers

One of the most frustrating aspects of Michigan’s loss at Ohio State earlier this season was how Michigan’s two starting freshmen, Nik Stauskas and Glenn Robinson III, managed to be such a neglected part of the game plan. Nik Stauskas had his first scoreless game and could never get in any sort of offensive flow, and Glenn Robinson III was 3-of-8 from the field. In the first half of the game on Tuesday, it was clear Stauskas wasn’t going to let something like that happen again. Trapped in a corner after snagging the deflection by Amir Williams, with Sam Thompson all over him, Stauskas created a shot for himself. After looking for the pass, Stauskas wisely keeps his dribble until he decides on a move we usually see from Trey Burke: a jab-step before backing up and fading away. The shot seemed nearly impossible, but it went in over the outstretched arms of perhaps Ohio State’s best athlete and it was crucial for Stauskas’s confidence down the stretch. Later, Stauskas uses a screen from Jordan Morgan to set up around NBA range and fire another three. On the third play of the sequence, Robinson gets in on the act. Michigan’s other freshman starter didn’t have a great game but was tasked with the tall order of guarding Deshaun Thomas all night. Here, we see a defensive lapse from Ohio State we didn’t see in Columbus, partly due to the transition-like nature of this possession for Michigan. When Trey Burke got to the three-point line, Ohio State’s defense was far from set and Thomas was more worried about protecting the post than Robinson in the corner. Burke recognized this, drove to the lane, and kicked out to Robinson for a wide-open three.

3. Tim Hardaway Jr. leaves his consciousness in the locker room at halftime

There are many phrases to describe Tim Hardaway Jr. in the second half of Tuesday’s game. On fire, unconscious, wet — they all work. Simply put, his shooting was so hot it could be called incandescent. Hardaway made five threes in the second frame and this was far from a routine shooting display: all five were incredibly important to keep Michigan in the game.

The Wolverines defense gave up open shot after offensive rebound in the second half and without Hardaway’s threes; the game easily could have gotten out of hand. Michigan found itself down eight early in the second half when Glenn Robinson III made a nice finish through contact to cut the lead to five points. It was at that point when Hardaway first struck. His three at the top of the key brought Michigan back to within one possession. After the initial barrage of long-range bombs from Hardaway — three of them in just over two minutes, the junior had gone on his own personal 9-2 run to put Michigan up by two. John Beilein said after the game that “We couldn’t dial up plays fast enough.” Give the coach credit: when he saw Hardaway was catching fire, he made sure his team found ways to get him the ball. One particularly pretty play was Hardaway’s third three, where he sets a subtle screen on Craft after handing the ball off to Burke then slips to the 3-point line. His fourth and fifth triples feature the same, relatively simple, action using an off ball screen. Hardaway kept knocking down the shots, so John Beilein was smart enough to keep calling his number.

This stretch was about Michigan getting exactly what it needed, when it needed it on the offensive end of the floor. The Wolverines couldn’t stop Ohio State but proved they could score the ball just as easily. The Wolverines also found a couple of rare transition opportunities. First Glenn Robinson III corrals an errant save attempt by Aaron Craft and outlets it to Trey Burke for an easy dunk. Later, Michigan is able to push the tempo again off a clean defensive rebound – a rarity on the night – as Burke finds Stauskas for a transition triple. That basket gave Michigan a one-point lead with about three and a half minutes to play.

Amir Williams ties the game with a free throw and Tim Hardaway Jr. tries to answer on the other end with an emphatic dunk. Robinson is rejected in equally grandiose fashion but the ball ends up in Robinson’s hands and he quickly tosses it to Burke for an open three. With the game tied at 70, Michigan goes to its bread and butter: the pick-and-roll. Burke loses Craft on a great screen from Robinson and weaves his way into the lane drawing the help defense. As the help comes, Burke makes a textbook pass to Mitch McGary, who slams it home along the baseline.

No, Trey Burke’s last shot of regulation was not a good shot. Yes, we all saw him hit one eerily similar to close out the first half of Michigan’s game against Indiana at Assembly Hall, but just because he is capable of hitting the shot doesn’t make it a good one. Beilein himself said he would have preferred Burke to get into the lane and force something toward the basket in the hopes of getting fouled. Michigan got the switch it wanted after Robinson’s screen – Thomas on Burke – but Burke opted to shoot over Thomas rather than taking the bigger defender off of the dribble. Burke’s step back clanked off the rim and the game headed to overtime.

Luckily for Michigan, Burke didn’t learn many lessons from the final play of regulation. During Michigan’s first possession of the overtime period, Burke finds himself with the ball at the end of the shot clock, guarded by Craft. Burke ends up taking another contested three but steps into the jumper, as opposed to away, and nails the three over Craft’s outstretched hand. While Sam Ponder was probably right that Beilein didn’t necessarily want that shot, Burke had little choice given the situation. That make ended up being surprisingly decisive – it served as the eventual game winner and there were just three other points scored by both teams combined in the extra period.

In a game that saw Michigan struggle mightily on the defensive end, the Wolverines flipped the script in overtime and ended up winning on two miraculous defensive plays. Ironically, the victim of Michigan’s suddenly stellar defense was perhaps the best-known defender in the country: Aaron Craft. Ohio State’s point guard played terrific defense on Trey Burke all night, but when the game was on the line, it was the defense of Burke and Tim Hardaway Jr. that decided this one. On the second-to-last possession for Ohio State, Craft gets free of Burke on a screen, but Burke doesn’t give up on the play. The sophomore darts after Craft and as Craft goes up with a mid-range jumper, Burke comes flying in and knocks it away from behind

The flagrant-1 debate is neither here nor there and it wasn’t called, sending Robinson to the line to split a pair of free throws. Thad Matta opts not to call a timeout, leaving Craft to put his head down and try to make a play. Craft beats Burke pretty well, fights through some contact and motors into Tim Hardaway Jr. – hoping for a foul fall that never came.  Tim Hardaway swatted Craft’s layup attempt and the victory was sealed. It sounds silly, but this game was as close to a must-win in early February as they can get, and the Wolverines pulled this one off in stunning and entertaining fashion.