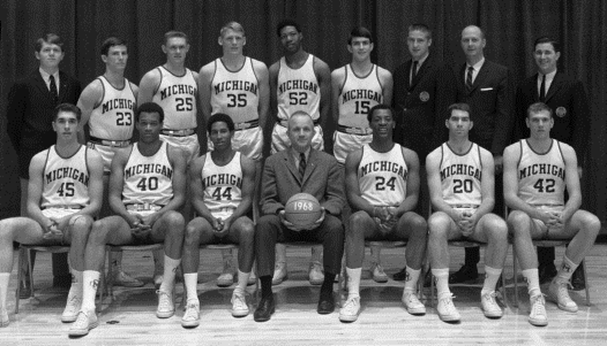 Michigan isn’t done wearing alternative uniforms this season. The Athletic Department announced on Wednesday evening that the Wolverines would wear white 1968 throwback uniforms for their February 17th game against Penn State. A picture of the 1968 team is above, here’s the athletic department release which states the uniforms are “identical to the ones worn” in 1968.

The men’s and women’s basketball teams will wear throwback uniforms in their weekend games. Adidas produced white uniforms that pay tribute to the opening of Crisler Arena in 1968. The retro uniforms are identical to the ones worn by the men’s basketball program in 1968.

The weekend concludes with the men’s basketball game against Penn State on Sunday, Feb. 17. Prior to the noon tipoff, Michigan Athletics will have a formal ribbon cutting ceremony for Crisler Center.

The athletic department is going to Stripe Out the entire arena for the game with the Nittany Lions. Each section has a designated maize or blue color designation. (See Stripe Out map here.)