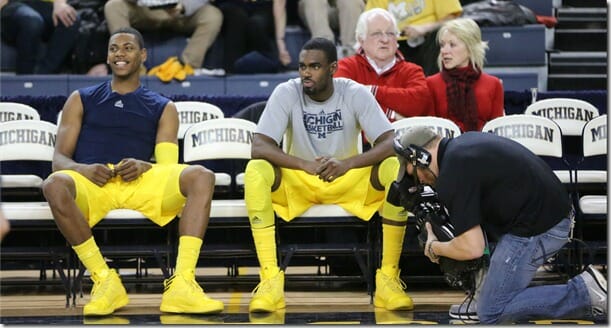 As the college hoops season enters February and March creeps closer, a number of teams have yet to decide their postseason fate. This college hoops season has been full of surprises and nearly impossible to predict — just ask No. 5 Kansas, who lost on Wednesday to TCU. Among all the confusion, Michigan remains relatively steady. The Wolverines have lost two close games to highly-ranked teams on the road, but they have held serve at home so far and still appear to be in excellent position to land a no. 1 seed in the NCAA Tournament.

That being said, there is still plenty of room for error on Michigan’s schedule. The team travels to distinctly inhospitable  Madison to play Wisconsin on Saturday, and from there will travel to East Lansing to play the Spartans just three days later. Sitting at 1-1 so far in this grueling 4-game stretch is nothing to sneeze at, and it seems a reasonable expectation for Michigan, given the team’s struggles on the road this season, is to split the next two. From that point, four of Michigan’s final six games are at home, and the road games aren’t particularly daunting — Penn State and Purdue. The home games won’t be picnics — among the Wolverines’ opponents are Michigan State, Indiana and Illinois — but Michigan has been stellar at the Crisler Center so far this season. The Wolverines recently knocked off 8th-ranked Ohio State at home and are in excellent position, despite a loaded Big Ten, to secure a very high seed.

After the jump you can explore an in-depth look at Michigan’s resume, a collection of projections from notable bracketologists, as well as a look at how other Big Ten teams have fared during this stretch of the season and where they sit in the NCAA Tournament picture.