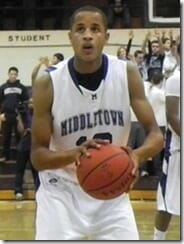 Vince Edwards, a 2014 swingman recruit out of Middletown, Ohio, is around 6-foot-6, 200 pounds. He has great length and is very versatile; he is comfortable with the ball on the perimeter and has a good jump shot, but he’s even more effective hear the hoop and is a strong finisher in the paint.

To the Michigan coaching staff, Edwards conjures up images of one of the team’s breakout stars this season: Glenn Robinson III. And with Robinson already a trendy pick on NBA draft boards, it’s understandable that the Wolverines would be looking for a suitable replacement come two seasons from now.

“That’s exactly who Coach Vall (Michigan assistant LaVall Jordan) told me to watch and Coach Beilein, they were telling me to watch Glenn Robinson III,” Edwards said after Middletown’s game against Lakota West last Friday. “I can do a lot of what he can do.”

When I asked Bill Edwards, Vince’s father, about the comparison to Robinson, he was quick to say his son isn’t where Robinson is right now athletically. However, he could see Edwards fitting into Michigan’s system with some of the tweaks John Beilein has added to accommodate the Wolverines’ newfound athleticism.

“Glenn Robinson III is a real special player. Really athletic. I can see Vince in their system,” Bill said. “If you’d have asked me that question two years ago, I would have told you no. But the coach up there has really changed their style of play and it seems to really be working for them.”

Edwards has been getting attention from schools around the state of Ohio, already holding offers from Dayton and Xavier. However, the school that is showing him the most interest, by far, is Purdue.

Matt Painter and his staff have been at more than a few of Edwards’ games so far this season, and it appears the Boilermakers’ staff are continuing with the full-court press to land Edwards for their 2014 class.

“I’ll say that it’s hard to show more interest than Purdue is showing. Every time I look up, (Matt) Painter’s around,” Bill said. “That was his point of focus with me. He said, ‘a lot of people are gonna tell you, but I’m gonna show you. Every time you look up, you’re gonna see me.’ And every time I’ve looked up, I’ve seen him, just about. He’ll play on a Saturday, but he’ll be at a Middletown game on a Friday. He seems to be really dedicated to the task at hand.”

Vince agreed that Purdue is recruiting him the hardest right now, but reiterated that both programs have similar structures.

“Yes sir,” Edwards responded when asked if Purdue was making the strongest push. ”

They recruit the same type of guys. Coach Beilein and Painter have both said that before. There’s no difference in their recruitment. They’re like the same people on the coaching staffs.”

This isn’t to say Michigan hasn’t been recruiting Edwards, as well. Vince reported that he has spoken with Jordan quite a bit.

The understanding of Edwards’s situation with Michigan is that there’s an offer waiting for the Middletown native when he arrives in Ann Arbor for a visit. However, so far at least two trips have been derailed by his parents’ work schedules. John Beilein’s policy is to offer players only after they visit, so it’s unlikely Edwards will formally receive an offer until he arrives in Ann Arbor.

No plans for a trip have been set at this point, but Edwards said they will probably try to set something up in the off-season.

“We just have to get a date set up,” Edwads said. “It’s just been hard with my parents working. Maybe in the off-season.”

Edwards’s father joked that he would rather his son receive an offer before making the commitment to get to Michigan’s campus but admitted that Michigan has showed increased interest of late.

“They definitely have picked up their recruitment. I’ve seen Coach Beilein in the stands a few times, which I haven’t in the past, and that’s really shown me a commitment now that they want him.”

For now, Edwards will continue to watch Glenn Robinson III during Michigan games to discern what his role on Michigan would be. At this point in his high school career, Robinson himself was a bit shorter, skinny as a pole but with tremendous upside and a good all-around game. Edwards still has a ways to go before he can be compared to Robinson now, but his level is already comparable to where Robinson was as a junior in high school.

“The key for him now, as he goes to the next level, is getting a little quicker in terms of his footwork,” Bill said. “His strength will come. He has a frame where he won’t have problems packing on pounds. If he really wants to continue to be versatile, he’s going to have to work on his quickness.”