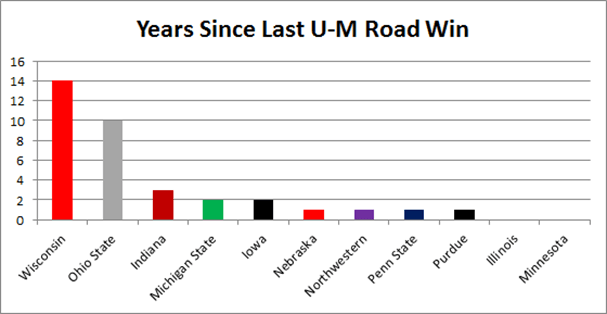 It’s always interesting to look at past games in retrospect and analyze their lasting significance. Michigan’s win at Michigan State in 2011 or the fateful final Sunday of last year’s regular season are some obvious games that will be remember for their impact. However, Michigan’s win over Wisconsin last January shouldn’t be overlooked as a program building game. At that point in the season the Wolverines were 12-3 and while obviously a good team, they weren’t yet considered Big Ten contenders.

The Wolverines left no doubt, beating the Badgers by 18 points – their largest margin of victory in Big Ten play – in just a 54 possession game. It took John Beilein five years to finally top Bo Ryan, but the win served as validation. Michigan would only lose three more Big Ten games over the conference slate en route to a share conference crown and it was tough to deny that early blowout win over Wisconsin sparked the Wolverines.

There was no rematch in Madison last season and the Wolverines have yet another streak to snap: Michigan hasn’t won at the Kohl Center since 1999. The 14 year streak is the longest road drought for the Wolverines in the Big Ten:

Attempting to assess Wisconsin is a perennial problem for those of us that cover the Big Ten. The Badgers always appear to take a step back in talent (Jordan Taylor) or drop a questionable out of conference game or two (Virginia at home) but by the time January and February roll around, they are a team built to win Big Ten games (7-3 thus far). The Badgers struggle to score, ranked 7th in conference scoring efficiency, but tout the league’s best defense and that has been enough to manufacture wins.

As mentioned, Wisconsin’s offense has struggled this season. The Badgers are scoring .98 points per Big Ten possession and even that number is inflated by two games against Illinois. Wisconsin scored 1.15 PPP against the Illini compared to just .96 PPP against the rest of the league. Wisconsin ranks 6th or 7th in the league in shooting (46% eFG%), offensive rebounding (31% OR Rate) and free throw rate (31%). While those numbers aren’t awful, they are nothing to write home about either. What the Badgers do well is slow games to a crawl (59 possessions per game) and value the basketball (15% TO Rate, 2nd B1G). The Badgers offensive woes even carry over the free throw line. Almost inexplicably, Wisconsin is shooting just 59 percent from the free throw line in Big Ten games while its opponents are shooting 72%.

Defensively, Wisconsin plays a physical but conservative style of basketball – somewhat similar to what Michigan attempts to emulate. The Badgers have the Big Ten’s best effective field goal percentage allowed and defensive rebounding percentages in the conference. Wisconsin rebounds 72 percent of its opponents misses and forces its opponents to shoot predominantly difficult twos. Per Hoop-Math, 45 percent of Badger opponents’ shots are two point jumpers and they connect at just a 34 percent rate. Wisconsin also does a good job of limiting shots at the rim (31% of FGAs) and manages to eliminate the three point shot as well as anyone. In Big Ten games the Badgers not only allowed the fewest three point attempts (22 3PA for every 100 FGA), they have allowed the lowest percentage of made threes at 27%. Wisconsin rarely forces turnovers but that’s an afterthought because of the Badgers do such a good job of eliminating good shot opportunities.

The fact that Ryan Evans is the go-to player in the Wisconsin offense illustrates why the Badgers struggle to score points. The 6-foot-6 senior is a lot of (good) things but he just isn’t an offensive playmaker. Evans has an offensive rating of just 90.1 and he’s making 43% of his twos and 9% of his threes. He’s great at getting to the free throw line but that doesn’t help his cause; he’s made just 45 of 106 (43%) free throws this season – a befuddling statistic considering he was a 71 percent free throw shooter his first three seasons.

That’s not to say the Wisconsin offense is devoid of any offensive weapons.The two most dangerous Badger offensive threats lie in the front court with big man Jared Berggren and sensational freshman Sam Dekker. Berggren is not only a great defender – one of the better shot blockers and rebounders in the league – he’s also a great post scorer. Dekker is one of the best true freshmen in the league. The 6-foot-7 forward attempts nearly half his shots from three point range, at a 42% clip, but also makes 51% of his twos. Mike Bruesewitz also contributes in the front court and while he’s rarely used offensively, the floppy haired forward has the knack for making plays and hits an impressive 66% of his twos.

Ben Brust and Traevon Jackson anchor the backcourt. Brust attempts over half his shots from three point range and hits at a 39% clip. He’s a low turnover but low assist player but the most reliable player for Ryan in the backcourt. Jackson has struggled offensively to say the least. He has a higher turnover than assist rate and shoots 39% on twos and  28% on threes.

Tuesday’s game against Ohio State proved that a bad defensive night can make a mediocre offense look great. The Wolverines have surrendered 155 points in their last 126 defensive possessions – 1.23 points per trip. No matter the level of competition, that’s a troubling statistic. Wisconsin is far from the best offensive team in the league but the Badgers run their offense for a full 35 seconds and force teams to guard. Michigan needs a good defensive performance to not just prove that it can defend but to get a win in Madison. This is a game that will take defensive intensity from the Wolverines, who will be forced to guard for the full shot clock, but Michigan’s defensive approach will also be much different from Tuesday evening. Against Ohio State, Michigan was throwing multiple people at Deshaun Thomas to get him out of his game and that left the Wolverines exposed after a couple passes. John Beilein should be able to take a more conservative approach against Wisconsin given the Badgers lack of truly dangerous scoring weapons.

Ken Pomeroy likes Michigan by a hair, 62-60 in a 59 possession game with a 56 percent chance at a road win. With Indiana’s loss at Illinois on Thursday night, the No. 1 ranking is back on the line. But it’s the Kohl Center and that building is something of a house of horrors for the majority of the conference. No matter what you think of this year’s Wisconsin team, a win in that building would leave nothing but satisfaction.