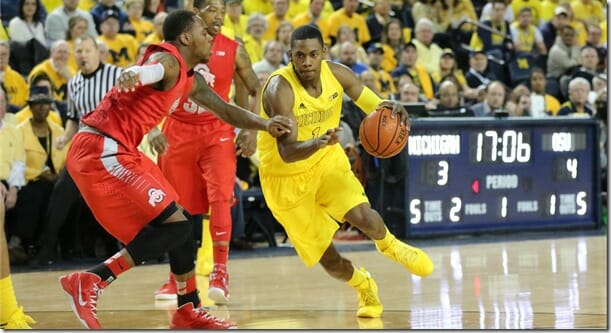 Death, taxes and Wisconsin near the top of the Big Ten. Wisconsin’s success has been one of the conference’s most reliable assumptions for the past decade or so.

This year, however, with a costly injury to the Badgers’ starting point guard Josh Gasser and an underwhelming performance in early-season non-conference play, Wisconsin looked as though it may be entering a down year. The Badgers started off hot in conference play, handling some of the Big Ten’s bottom feeders, but have since evened out and now stand at 7-3 — a game out of first place.

John Beilein, for one, does not see this Wisconsin team as any different from the very good teams of years past.

“Wisconsin is the same Wisconsin you’ve seen for a long time. They’re patient, they play very good defense. You look at their field goal percentage, they’re incredible on defense,” Beilein said. “They have a younger backcourt than we’ve seen before. … They’re a good team both home and away, but particularly at the Kohl Center.”

Wisconsin likes to play as slow as ever, averaging just 59 possessions per game in Big Ten play. There is no doubt the Badgers will try to slow the game down given Michigan’s highly efficient transition attack. Wisconsin would love to make this game look something like its contest against Minnesota, a 51 possession slosh that ended in a 45-44 win.

Beilein said he is preparing his team for the kind of slug fest they are likely to face in Madison on Saturday.

“With some teams, you have to understand that the game is going to be in the forties, fifties, sixties. Let’s face it – everybody likes to score points. You’re probably not going to score as many points as you’re used to, you’re not going to get as many shots,” Beilein said. “It’s going to be lower possessions. Not getting turnovers, your value of the ball is important, and you have to take quality shots, but you also have to guard for 37 seconds, we say.”

That last point is key. Wisconsin likes to burn clock, and the Badgers are quite good at getting good looks at the basket near the end of the shot clock.

This makes it particularly difficult for the scout team to imitate, especially for guys like Josh Bartelstein and Eso Akunne, who both, Beilein said, would prefer to fire away.

“Wisconsin is the best I’ve ever seen, with one on the shot clock, still getting a good shot. It’s hard to practice those things,” Beilein said. “It kills guys like Eso and Josh because they want to jack up shots like some of the other teams. With Wisconsin you have to be patient.”

Throughout even the early portion of Michigan’s season, it seemed that, though the Wolverines were consistently stellar on offense, their defense could be hit-or-miss.

Over the past two games, the trepidation with which Michigan fans viewed the defensive side of the ball has been justified. With the loss of one of its key defensive cogs in Jordan Morgan, Michigan has struggled to defend. Against Indiana in Bloomington, Michigan allowed the Hoosiers to score 1.17 points per possession thanks to 59 effective field goal percentage shooting. Against Ohio State on Tuesday it was more of the same, the Buckeyes scored 1.16 points per trip via 58 effective field goal percentage shooting.

John Beilein has been looking for answers, but many of the problems on defense are due to something he has little control over: inexperience.

“We just looked at it and most of it was out of inexperience,” Beilein said. “We got so locked in to individual match-ups, we were trying to lock down a couple of people in all those games and didn’t go back to our – yeah, we’re trying to shut them down, but you still have to be at the mid-line, you still have to be in the paint when your man doesn’t have the ball. A lot of inexperience here out there on defense, as every game changes.”

When you are playing as many young players as Michigan does, the thick of the conference season gets especially difficult because instead of working on basic, fundamental tenets of defense — which most of them are still internalizing — they have to constantly be preparing for the next opponent and learning its offensive tendencies.

The result is a lack of repetitions of basic principles of Michigan’s defense, which is the foundation upon which players can build when they’re preparing for an individual opponent.

“For our guys, especially in that swing, we haven’t been able to have repetitions in practice in two weeks,” Beilein said. “Yesterday, we got reps in and that’s what we need. All of that comes with experience and repetition, which we have had none of for two straight weeks. Repetition in practice makes you better, and we haven’t been able to do that.”

Michigan plays mostly man-to-man defense, and while it may seem like a decent option to rely on some zone looks a bit more to preserve energy, Beilein said that is just not an option.

“If we stayed in the zone, they might score a thousand points,” he said.

Over the past two games, few Michigan players have logged more minutes than Glenn Robinson III. The freshman was the only Wolverine to play the entire game against Indiana, and against Ohio State he played 41 minutes.

Given that Robinson has experienced a marked decline in efficiency and production of the past two games (his numbers against Ohio State weren’t horrible, but he was a non-factor for much of the game), the question must be asked: does Robinson need more rest? John Beilein says yes.

“I want to make sure that he does have a little more rest. The way the schedule has been, it was difficult to do that. Now I think he’ll get more rest in the rest of our games,” Beilein said. “Somehow, trying to get him about five more minutes [of rest]  is what we’d like to do.”

Beilein mentioned that Jordan Morgan being out has contributed significantly to the volume of minutes Robinson has played. The coach said Morgan would undoubtedly be taking up time at the four spot if he was healthy.

“Getting Jordan back in there and having the trust with what Jordan does defensively, is important to us,” Beilein said. “But if not, we have other options. We can play smaller or we can play bigger.”

If Michigan were to go bigger, one option would be to stick Robinson in the three role, with two bigs at the four and five. However, Beilein said one objective of going two-post would be to get rest for Robinson.

And then there’s the added question of who he would take out at the three in favor of Robinson.

“When we go bigger, we’re trying to get him rest,” Beilein said. “Then, who do you take out? Tim (Hardaway Jr.) or Nik (Stauskas)? You’re taking one of those guys out more. I like what Caris (LeVert) has brought us, too. That’s the dilemma. Who do you take out? One through three right now is a tremendous strength right now on this team. Glenn has played great all year long. You can’t ask for more, especially from a freshman.”