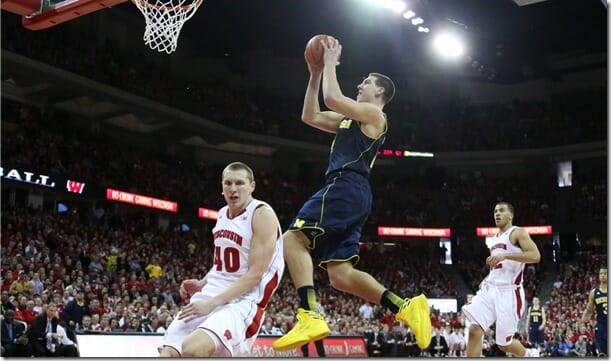 Nobody goes into the Kohl Center and plays their own game. Bo Ryan’s team might struggle offensively but still knows how to turn a basketball game into a street fight. The Badgers dictate a slow tempo, play with grueling physicality and apply liberal body-on-body contact around the basket. Teams that win in Madison come into the game ready to play the exact same way, match Wisconsin’s toughness and and hope to make a few  critical plays down the stretch.

Michigan played Wisconsin basketball – utilizing two big men, playing a half court game and digging in on the defensive end of the floor. Both teams had their spells of good play in the first 39 minutes, Wisconsin took a nine point lead in the first half and Michigan had a six point lead with 6:34 to play in the second, but this was a back-and-forth game throughout with 12 lead changes and nine ties.

It was only fitting that the final 67 seconds were nothing short of chaotic. Trey Burke put Michigan ahead by three only to be posterized by Jared Berggren on the other end of the floor for an and-1 dunk. Tim Hardaway Jr. buried a seemingly decisive three pointer with 2.4 seconds only to see Ben Brust make a 36-footer at the buzzer. The Wolverines matched Wisconsin throughout but just couldn’t find the execution, or luck, to put the game away. In overtime, Wisconsin continued to execute and another Ben Brust three pointer would allow the Badgers to prevail with a three point victory.

Michigan managed just 62 points in 68 offensive possessions — .91 points per possession. The Wolverines struggled to shoot inside – 43% on twos – and outside – 28% on threes – for a 43 effective field goal percentage. Michigan tried to attack throughout the game, attempting 75 percent of its field goals inside the arc, but was rewarded with just two free throw attempts for 71 field goal attempts in 45 minutes. The Badgers committed just eight fouls in 45 minutes.
The Wolverines rebounded just 26 percent of their missed shots, managing seven second chance points, but did value the basketball, turning it over on just 10 percent of their offensive possessions.

Michigan’s offense was actually very good at stretches but failed to execute in critical spots down the stretch. The Wolverines scored just five points on their final eight possessions of regulation – going scoreless from 6:31 to 1:06 – and mustered just two points in overtime. It was this five minute scoreless stretch that cost the Wolverines the game:

Six empty possessions in the final six minutes isn’t good enough to win on the road in the Big Ten, especially at the Kohl Center. Michigan missed other opportunities and still should have won the game in the final minute but this stretch will be the one that players and coaches will look back on with frustration.

Michigan held Wisconsin to .96 points per trip and despite the Badgers’ well documented offensive struggles that’s a performance to build on. The Wolverines forced turnovers on 21 percent of Wisconsin’s offensive possessions and cleaned up the defensive glass, grabbing 74% of Wisconsin’s misses. Michigan defended twos well, holding Wisconsin to 45% inside the arc, but the Badgers did connect on 42 percent of their triples. Overall, there really isn’t much to complain with on the defensive end from the Wolverines and had they converted at even an average rate they would have played good enough defense to win.

The end game strategy wasn’t great by either team to close regulation. Wisconsin failed to use any its fouls to give and gave up a deep, — ok maybe not so open, three to Tim Hardaway Jr. to give Michigan the lead with 2.4 seconds to play. John Beilein said Michigan’s strategy was to foul on the catch on the final play and that didn’t happen. Still, the big decision seems to be not guarding the inbounder. The logic behind putting McGary deep is that he can help prevent a long overhead pass but the counter argument is that you allow Brust to catch the ball on the run and sometimes people get lucky and hit 36-footers. Hindsight is 20-20 after all.

It’s basketball and games like this happen. Four of the top five teams in the country lost this week and it took a fairly heroic effort for Wisconsin to win on its home floor. Michigan is now 1-2 in the four game stretch which was always going to be the most difficult two weeks of the season – and that’s without Jordan Morgan. Win in East Lansing on Tuesday and all is forgotten but that game is vitally important. Michigan stands a game out of first place today and can’t afford to fall another game behind – even with four of its final six games at home.