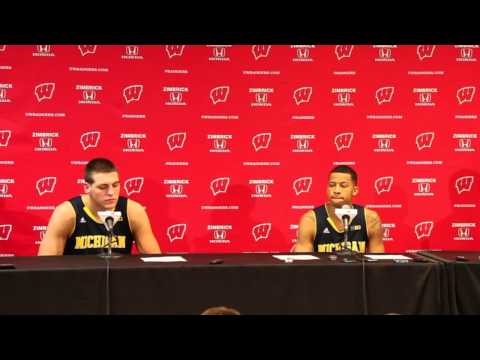 Trey Burke and Mitch McGary took the podium in Madison after Michigan’s heartbreaking overtime loss to the Badgers. Watch the press conference in the embedded media player below or find quotes after the jump.

Transcribed quotes after the jump.

On the range of emotions down the stretch: “We definitely thought we had a shot of winning the game going into overtime. We just came in the huddle and  said ‘it was a great shot, we have to come together for the next five minutes’.”

On what he told Brust going into overtime and how the overtime played out: “I told him it was a great shot. We just tried to get stops and get out in transition [in overtime]. They played a great game and hit some big shots and it just went their way.”

On the long possessions defensively: “I think we did a good job of containing them. On certain possessions throughout the game we obviously game them some extra looks. They played a very solid game today and took it all the way to overtime and it went their way.”

On Berggren dunk: “It was a great dunk. I thought I was outside of the charge area but sometimes you don’t get those calls. I think that gave them a lot of momentum and that’s when Tim came down and hit a big shot, then they hit a big shot to take it to overtime.”