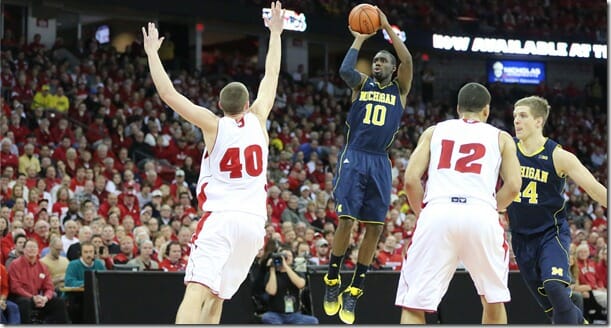 Hardaway is playing perhaps the best offensive basketball of his career. He went 8-of-12 from behind the three point line en route to 41 points over Michigan’s last two games. He’s hit 54 percent of his threes in conference games, tops in the Big Ten. Although he’s missed some shots around the rim – 7-of-19 two point shooting – Hardaway is playing complete basketball: attacking the bucket, playing off of the pick and roll and getting involved in transition.

Michigan might have slipped somewhat through its recent difficult stretch but Mitch McGary has emerged as a star. McGary had the two best scoring performances, 14 and 12 points, of his young career against Ohio State and Wisconsin. He averaged 13 points and seven rebounds per game on 13-of-23 shooting. He also racked up seven steals in just two games, a rare stat for a big man. McGary has gone from a hustle player and impact rebounded to an offensive threat. He hit three mid-range jumpers against Wisconsin and if that becomes a reliable part of his game then the sky is the limit.

17.5 points and six assists per game with a 52% effective field goal percentage isn’t half bad for an average week. Those could be career numbers for a host of other players but for Burke, they are just business as usual. Burke is the only Big Ten player to score at least 15 points in every league game this season and his consistency is oftentimes taken for granted.

Robinson has been one of the primary scapegoats for Michigan’s recent slide and there’s little doubt that he’s hit a rough patch. The freshman scored 14 points on 5-of-14 shooting over the last two games combined and is clearly lacking confidence. Is it tired legs? Beilein finally bought Robinson some rest against Wisconsin by playing Bielfeldt for more minutes.

Stauskas hit a couple of big threes against Ohio State but is also dealing with the wear and tear of Big Ten play. He turned the ball over seven times in the last two games and went 2-of-5 inside and 4-of-10 outside over that same span. To his credit, he’s taken to the glass; grabbing 13 rebounds over the last two games.

Horford has started every game in Jordan Morgan’s absence but his productivity has slowly declined. McGary has been far more impactful and has taken away the lion’s share of minutes at the five position. Horford scored just one bucket in each of the last two games on seven attempts combined. If Morgan remains sidelined, Michigan is going to need more production from Horford to escape East Lansing with a win on Tuesday.

Bielfeldt was tapped to play major minutes at Wisconsin to battle against the physical Badger front court. He missed a couple of baskets around the hoop but provided the sort of physical presence the Wolverines needed. His ceiling may be limited but I’d look for Bielfeldt to earn more playing time going forward as John Beilein works to rest his frontcourt with Morgan’s absence.

Albrecht struggled against Ohio State’s ball pressure defense but played well against Wisconsin for 11 minutes – including leading a 7-0 run in the first half.

LeVert had a forgettable week which bottomed in overtime at Wisconsin. He’s able to get into some good spots offensively but seems to be hesitating just a bit when offensive opportunities present themselves. LeVert has made an impact at times this season but is averaging just 2.5 points per game in league play. He’s shooting well from three point range (5-of-11) but is just 4-of-14 inside the arc.