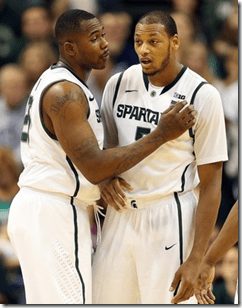 Michigan’s match-up against Michigan State in East Lansing on Tuesday will be one of the toughest tests yet for the Wolverines, but it won’t be because they don’t know what’s coming.

The Spartans’ game plan this season is no secret: play physical man-to-man defense, feed the post and crash the boards. John Beilein is well aware of what his team will be facing on Tuesday, and this season so far has prepared his team for a hard-hitting contest.

“They are extremely physical, as much of the Big Ten is. I think we’ve grown in that area a great deal as we spend more time in the weight room, our recruiting has given us some bodies that are a little more fully developed,” Beilein said. “The number of no-calls right now in any Big Ten game is astonishing to me. It’s just astonishing. People are getting knocked down, and it’s just play on.”

With Michigan State featuring arguably the Big Ten’s most potent two-post attack, Michigan’s ability to protect the paint and play physical on the boards will be essential to its success. In years past, the Spartans have held a decided advantage in the area of rebounding on both sides of the ball — but this year, Michigan possesses some rebounding prowess of its own.

The Wolverines are actually a spot ahead of Michigan State in the Big Ten in terms of offensive rebounding percentage. This is thanks in a big part to Mitch McGary, who has been an animal on the boards all year. McGary’s 17% offensive rebounding rate ranks 10th nationally among qualified players.

Rebounding may be easier to handle for Michigan this year, but stopping the Spartans’ two-headed big man attack of Derrick Nix and Adriean Payne, as well as keeping explosive Branden Dawson off of the glass, will be priority number one for the Wolverines on defense. In that regard, the possible absence of Jordan Morgan looms large.

“It’s very important for us to stop their bigs. They do a great job of scoring in the low post with Nix and Payne and Dawson,” Tim Hardaway Jr. said. “A lot of their points come off of second-chance shots.”

Beilein said it will be all hands on deck in the post on Tuesday, and emphasized the importance of guarding the Spartans down low.

“Especially up there (last year), we didn’t have an answer for the bodies they were throwing at us. Hopefully we have more girth there to go against them this time, because it’s a physical game,” Beilein said. “Much of their game is developed around post play. You cannot be soft in the post and expect to guard them.”

Michigan getting used to the big stage

Remember before Michigan went on the road against Ohio State back in early January, how the Wolverines were fielding questions about how they would respond to such a raucous road environment? Fans wondered how they would play in such a meaningful game after kicking off the conference season with three relatively easy match-ups.

After road games against Ohio State, perhaps the biggest game of the season against Indiana at Assembly Hall, road wins at Minnesota and Illinois and fighting tooth-and-nail with Wisconsin in Madison, the days when Michigan wasn’t used to big-game environments seems like ages ago. They still haven’t always gone as the Wolverines would hope.

John Beilein said that his team has matured since then, but is still pumped up about the biggest games in the schedule.

“I think, before the game starts, I think the adrenaline is not like, ‘hey, this is old hat.’ I think it’s always new and exciting. At the same time, it’s not as probably shocking as it was the first times,” Beilein said. “There’s always a level of maturation with that. But this one, like the game here (against Ohio State), the game against Wisconsin, the game against Indiana, it will probably be a few decibel levels higher than normal.”

Trey Burke said Michigan is well-prepared for what is sure to be yet another pressure-packed environment in East Lansing.

“We know that as soon as we get off the bus, we’re going to be getting a lot of stuff and people are going to be talking a lot of trash. That’s not what we’re there for. We’re there to get a win. We’re going to East Lansing and it’s a business trip,” Burke said. “We just need to go out there and play the way we know how to play. Try to tune out the crowd, though it’s going to be hard, we’ve played in a couple of tough environments this year so we’re pretty much used to it.”

Jordan Morgan forced to halt rehab for a time, questionable for Michigan State

It has been a longer-than-expected road back for Jordan Morgan after going down with a severe ankle sprain in the opening minutes of Michigan’s game against Illinois on January 27th.

The forward has been working hard to get back in the rotation for the Wolverines, but Beilein said the team was forced to shut him down for Saturday’s match-up against Wisconsin after previously hoping he’d be available.

“He practiced on Thursday and he actually did a couple of things. Then the next day he was not nearly as efficient as he was on Thursday. I expected him to be able to give us some pretty good minutes after Thursday’s practice. After Friday’s practice I said, ‘this is only going to get worse if we do not give him this time to rehab,’” Beilein said. “I didn’t want it to continue to linger, thinking that the Michigan State game, if it were possible for him to play in that game there was only one way and that was if he didn’t play against Wisconsin the way things were going.”

Michigan has felt the absence of Morgan’s guidance in post defense and his expert box-out ability. The redshirt junior is also Michigan’s only big man with experience against Michigan State.

Trey Burke said the team will undoubtedly miss Morgan, but was quick to mention that he’s been pleased with what some of the other big men have given the team.

“We notice his presence missing. But Mitch and Jon, they’ve been doing a phenomenal job of coming in and giving us what they’ve got on the offensive end. Mitch brings a jumpshot that we’ve been missing, like an 8-foot jumpshot that we’ve been missing to the lineup,” Burke said. “It’s good and bad at the same time. It’s bad because J-Mo, he’s one of our best defensive players and our best rebounders and he’s kid of a voice out there on the court. With his absence, we definitely miss his presence but I’m sure he’ll be back in no time.”