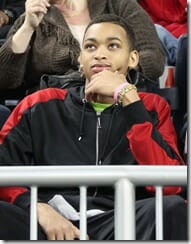 We’ve been behind on recruiting updates. Here are some leftover notes, tidbits and scouting reports from the last two weeks.

Mark Donnal continues to impress as well. Donnal recently had a big game against Wisconsin-bound big man Nigel Hayes. Donnal finished with 15 points and 10 rebounds in a 50-41 win over Whitmer. The win served as validation for Donnal’s Anthony Wayne squad.

“This gives us a lot of confidence,” Donnal said. “We know if we want to go far in the tournament we have to get wins like this because we’re going to play teams like this down the road. There are a lot of people doubting us that we aren’t good enough to play against the good TRAC teams like this. But, obviously, we proved people wrong tonight and put us on the map.”

Notes & videos on 2014 targets Kameron Chatman, AJ Turner, and Ricky Doyle as well as priority underclassmen targets after the jump.

2015 guard Eric Davis is one of the more talented 2015 prospects in the state of Michigan. The Arthur Hill guard was in attendance for Michigan’s win over Ohio State.

Davis recently visited North Carolina State and is being recruited by is also hearing from Michigan, Michigan State, North Carolina, Duke and Kentucky with offers from Oregon, Iowa and Iowa State.

For those unfamiliar with Davis’s game, here’s a highlight tape from this summer.

Beilein returned the favor, watching Davis and Arthur Hill against Romulus. Davis had 28 points and 11 rebounds in front of the Michigan head coach. Here’s video of his performance:

Josh Berenter was in attendance for De La Salle’s game at University of Detroit Jesuit on Friday, February 1st, to watch 2014 Michigan target AJ Turner face off against 2016 phenom Cassius Winston. Turner finished with 23 points in a losing effrot, while Winston scored 17 to lead U of D to a comeback win. Here’s a scouting report of both players:

In the last few weeks, A.J. Turner has been solely working on his ball handling after moving to the point guard position, primarily. On Friday night, he showed improved handles, and a better understanding of how to successfully run his team’s offense, scoring 23 points. He was more aggressive offensively, looking to create his own shot off the dribble, and showed the ability to knock down mid-range, and long- range shots in traffic. His size and length was bothersome, defensively, as he earned three blocks in the first half and altered several shots, guarding a much smaller player. His aggressiveness came back to bite him, though, as he got his fourth foul early in the fourth quarter, limiting his aggressiveness. Despite hitting a game-tying jumper with less than a second left in regulation to force overtime, Turner fouled out with 1:42 remaining in the overtime period, and his team’s offense would lose it’s rhythm, falling to University of Detroit Jesuit.

Turner recently tripped to Michigan and enjoyed the atmosphere at Crisler Center and appears to be one of the leading candidates to pick up the next offer that the Michigan staff extends.

Point guard Cassius Winston was extremely impressive running his team’s offense, especially as a freshman. Winston showed exceptional court vision, finding teammates in small windows that led to easy baskets. He was a little too aggressive defensively, earning two quick fouls in the first quarter, which forced him to the bench for nearly eight minutes of action. But when he returned, the Jesuit offense starting clicking. He went on a personal 5-0 run after coming back into the game and brought him team back from an 11-point deficit to keep it within striking distance. He showed patience in tight, late-game situations and rarely forced action, taking good shots, and finding good opportunities for his teammates. He showed great ball-handling skills and a basketball I.Q. beyond his years, and will be interesting to watch as his game continues to develop.

Winston is already hearing from Michigan, Michigan State and Ohio State along with a host of mid-majors. Michigan assistant Bacari Alexander has spent significant time focusing on the promising freshman guard.

2014 big man target Ricky Doyle has been sidelined with a stress fracture for weeks but he finally made his return to the court. The talented back to the basket man scored 15 points and grabbed eight rebounds in just nine minutes of play.  Doyle’s next game in action he had 31 points on 12-of-17 shooting with eight rebounds in a 67-60 win over Dunbar to win a district title

Chatman recently cut his list to eight – UCLA, Arizona, Washington, Oregon, Louisville, Georgetown, UConn, and Michigan – and was also profiled by the Gazette.

Kameron Chatman is 6’6”, and weighs 175 pounds. He is, by gift and by calling, a point guard. In today’s game, he throws a no-look pass to a teammate who nails a corner three, and he dunks a rebound over an opponent and a teammate. His speed and intelligence, and the fluidity with which he distributes the ball, almost make it look like he’s controlling the other nine players on the floor. Half the time the ball leaves his hand, it results in an assist. His team wins the game 90-39, as their fans jokingly chant, “We want tacos!”

Here’s some JV footage from the Gazette:

Josh Jackson one of the nation’s best

City League Hoops published a highlight film of Josh Jackson and it makes it very evident what sort of talent the 2016 Consortium star has the ability to become.