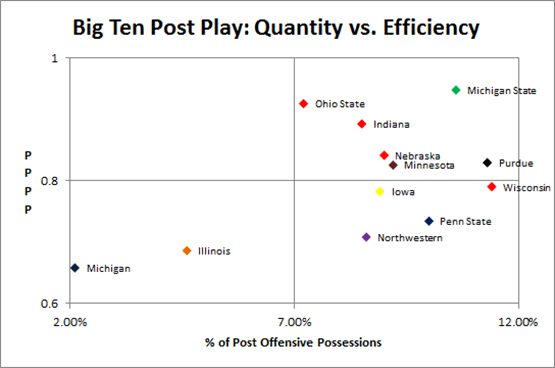 I’ve tried to declare this rivalry as “back” multiple times before and I’ve been blatantly guilty of jumping the gun. Now everyone else is doing it too and it might finally be safe to pull out that card once more.

Michigan and Michigan State will face off at the Breslin Center tonight both ranked squarely in the top ten. In 169 previous meetings, that’s never happened. This game is vitally important in the short term – both teams are in the thick of the Big Ten race and fighting for a No. 1 seed in the NCAA tournament – but relevancy is also being restored to the rivalry at a macro level. Michigan – the team largely responsible for the rivalry lacking any substance in the 2000s – has won three of the last four meetings and is demanding to be taken seriously. Both teams were involved in last year’s Big Ten title split and this is a game that now has prominence on a local, state and national level.

It would probably take 10 more games of this magnitude to compare the rivalry to Duke-North Carolina or anything of that level but this game is finally important for reasons other than both schools call the same state home.

Michigan State is tied at the top of the conference standings thanks to consistent but unspectacular play on both ends of the floor. The Spartan offense ranks third in the Big Ten at 1.06 points per possession and the defense ranks fourth at .97 points per trip. Some score the ball better (Indiana, Michigan) and others defend with more vigor (Ohio State, Wisconsin) but Michigan State has been balanced enough to manufacture wins.

Michigan State’s defense has been a bit difficult to figure out in Big Ten play. The Spartans are allowing their opponents to make 49 percent of their twos. Not only is that one of the most “un-Izzo” stats imaginable, it’s also the worst in the Big Ten. To its credit, Michigan State does a good job of forcing turnovers on 19 percent of its opponents’ possessions – with a league leading 13.4% steal rate – and grabbing defensive rebounds. The Spartans are also exactly at the league average in terms of allowing free throws. With few other weaknesses to speak of, the only thing keeping Michigan State’s Big Ten defense at a very good level rather than dominant is the inexplicable two point defensive woes.

Offensively, Michigan State is also very good but not great. The Spartans shoot 47% inside the arc and an impressive 41% outside the arc for a third-best 51% effective field goal percentage in Big Ten play. Michigan State’s turnover woes aren’t nearly as pronounced as they were in early season play but the Spartans still give the ball away on nearly 18% of their possessions, 8th best in the league. In another statistic that seems foreign to an Izzo coached team, Michigan State is rebounding just 31 percent of its missed shots in Big Ten play – just 7th best in the conference. The Spartans haven’t ranked worse than 2nd in Big Ten offensive rebounding since 2006.

Michigan State’s offensive success against Michigan could very well come down to free throws. The radar charts above show that the biggest difference between Michigan’s defense and Michigan State’s offense lies at the free throw line. The Spartans only rank 7th in the Big Ten in free throw rate but Ken Pomeroy’s game plan feature shows stronger correlation with free throw rate and offensive efficiency than any factor other than shooting. Michigan State’s four losses this season happen to have come in the four games where the Spartans got to the free throw line the least. Causation isn’t equal to correlation but Michigan fouls less than any team in the Big Ten and relies on keeping opponents off of the charity stripe. The importance of fouling could be magnified by depth concerns for both teams – Michigan in the front court and Michigan State in the backcourt.

The big name match-ups should live up to the billing. Trey Burke vs. Keith Appling is about as good as it gets for quick guards that can play on both ends of the floor. After an inexplicable three point shooting slump last year, Appling has regained his three point shot (37%) but is just average converting at the basket (46%). The later number probably has do to more with the degree of difficulty of some of his looks as he has incredible body control and the ability to get to the rack. Appling has also showed an aptitude for big moments this season as well, coming up with a number of critical baskets late in games for the Spartans.

Tim Hardaway Jr. and Gary Harris are shooting 54% and 52% respectively from three point range in Big Ten games – 1st and 3rd best in the conference. Both players can’t be left open from three point range but are also comfortable slashers and effective in transition. Branden Dawson and Glenn Robinson III are both elite level athletes from Northwest Indiana that can finish at the rim. The question is whether Dawson and Robinson guard each other or will they be forced to guard bigger (Robinson) or smaller (Dawson) players than they are comfortable with.

Injuries are a concern for both squads. Travis Trice is out for the third straight game with concussion symptoms. Without Trice, Izzo will rely on Denzel Valentine to play the majority of any bench minutes at all three guard spots. Valentine is a great passer and respectable shooter but like a lot of great freshman passers, he’s struggled to eliminate turnovers from his game at the Division I level.

Michigan could very well be without Jordan Morgan, who has missed the greater part of the last five games with a severe ankle injury. The injury concerns are notable because they could force both coaches’ hands at the most prominent coaching chess match: the four position.

John Beilein prefers to play with a stretch four, Glenn Robinson III, and he’s almost forced to stick with that approach given Jordan Morgan’s injury. Tom Izzo likes to play big, with a front court of Adreian Payne and Derrick Nix, and the option to play Branden Dawson at the four has been limited by the injury to Trice. Izzo can try to play small with Russell Byrd and Beilein can try to play big with Max Bielfeldt. In the recent past, Michigan has had great success by spreading out Michigan State’s big lineups but Robinson’s recent struggles are worrying. Neither coaches’ secondary options are particularly promising and whichever normal rotational player gets the most out of that mismatch early on could have a major advantage.

The greatest challenge for Michigan’s defense will be containing Michigan State’s Big Ten-leading post offense. The graph below plots Big Ten teams on two metrics: the percentage of possessions ending with a post touch versus points scored per post possession.

The Spartans clearly have the strongest combination of volume and efficiency and stopping the Michigan State post offense will be a priority for the Wolverines. Michigan has only allowed .68 points per post possession this season, second in the Big Ten, but there’s reason to hesitate before chalking up a Wolverine win. First, that metric just doesn’t pass the eye test. From watching the Wolverines play it feels like Michigan doesn’t do a great job defending the post. Second, according to the numbers, Jordan Morgan – at .5 points per post possession allowed – is Michigan’s best post defender and his status remains up in the air.

Michigan has doubled the post from time to time this year, but that might not be the best strategy against the Spartans. Michigan State is scoring 1.25 points per possession when Derrick Nix passes out of double teams and, as KJ points out, Nix has 17 assists to 8 turnovers in his last seven games. Adreian Payne is even more effective (in fewer opportunities) when passing the ball out of the post, scoring 1.67 PPP. Michigan’s young players especially have shown the tendency to look off their primary defensive responsibilities when the ball is thrown into the post and that could be a costly habit against the Spartans.

Ken Pomeroy says Michigan by 1 with a 55% chance of victory. Vegas opened with the game listed as a pick em. This game feels extremely important for Michigan. A win would keep the Wolverines a game out of first place with four of their last six at home. A loss would be Michigan’s 4th in the conference, essentially eliminating any margin for error down the stretch. Minnesota was a good road win but this is Michigan’s last chance at a marquee road win for the year and a chance to “get one back” so to speak after disappointing games at Ohio State, Indiana and Wisconsin.

This & That: Zack Novak will be in attendance. I answered some pre-game questions over at The Only Colors.