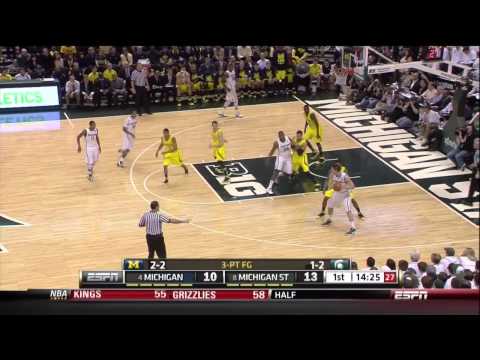 Five Key Plays is sponsored by The Wolverines Collection (Swiss timepieces for the ultimate Michigan Man),  post in the comments below to vote on which is a game changer.

If you have a weak stomach or trouble viewing disturbing images, you may want to step away from today’s edition of Five Key Plays now. Michigan was completely dominated by Michigan State on Tuesday in East Lansing, and it all started with post play. John Beilein said it best: “The experience in their post play was big.” That appeared to be the difference as Derrick Nix, a senior, worked over just about anyone Michigan threw at him — from a half-injured Jordan Morgan to freshmen Mitch McGary and Max Bielfeldt to a decidedly shell-shocked Jon Horford. Nix was an absolute force in the paint, working his way up and under, around and through Michigan’s meager post defense. The talented big man finished the game with 14 points, five rebounds and three assists, and by the time Michigan started double-teaming him in the second half, it was too late. Nix deserves credit: he’s an extremely tough match-up for any team because his size allows him to get deep in the post, and once he does it’s very difficult to stop him from scoring. Then, if you send help in the hopes of not allowing him to get too comfortable, he’s actually an excellent passer, especially when it comes to finding his teammates open on the perimeter. It was a microcosm of the game: Nix playing great, combined with Michigan’s post defense playing exceptionally poorly, made for a dominant night in the paint for the Detroit native.

Even if Derrick Nix has a terrific game, as he did on Tuesday, if Michigan simply rebounds a decent percent of Michigan State’s misses — as they were expected to given the Wolverines’ stellar defensive rebounding percentage this season — the damage inflicted by Nix could have been managed. But this game was a complete and total breakdown in nearly every phase, and rebounding was no different. This was especially true in the first half.  Once again, John Beilein: “The offensive rebounds that they got took a lot out of us. We have one of the best defensive rebounding percentages in the Big Ten, but it wasn’t even close tonight.” No, it wasn’t. There were instances of the ball bouncing the Spartans’ way, as on the long tip-in by Nix in the first play of the above sequence. But there were also breakdowns in execution, as on the next play: Michigan State gets out on the fast break and instead of closing out under control against Gary Harris, Glenn Robinson III flys by him, leaving Harris unblocked and in perfect position to grab his short miss. This led to — guess what — a Derrick Nix score later in the possession. Finally, there was a good old-fashioned lack of toughness down low, as on the third play of the sequence, which saw the Spartans grab three offensive rebounds before finally scoring an uncontested layup.

3) Spartans score off turnovers in the first half

The two aspects of the game that killed Michigan in the first half were two areas which the Wolverines’ usually don’t have any problems with: allowing extra possessions for Michigan State through giving up offensive rebounds, and killing possessions of their own with costly turnovers. Failure in those two areas tell most of the story as to why Michigan found itself in such a hole going into halftime. Mitch McGary, who definitely had his worst game of the Big Ten season on Tuesday, is heavily featured in the above clip — but he wasn’t alone. McGary found company with Michigan’s other two post players Jon Horford and Jordan Morgan, who racked up two turnovers each. What made these turnovers particularly painful was that they were virtually two points for Michigan State the second they left McGary’s hands — almost no work was required on the part of Branden Dawson in finishing the plays. “We had 16 turnovers and eight of them came out of post play, and virtually all of those were run-outs,” Beilein said after the game. Even when they weren’t automatic twos, did you notice anything about two of the offensive rebounding clips in the previous Key Play selection? Those rebounds came as a result of fast breaks and one of them was the result of a turnover — Michigan couldn’t get set on their box-outs and it made for a much easier offensive rebounding situation for Michigan State. The turnovers and offensive rebounds fed off each other and made for a lethal combination for the Wolverines.

4) Trey Burke has a great night offensively, keeps Michigan (barely) alive in the first half

Trey Burke did pretty much everything in his power to keep the Wolverines in the game, but his teammates weren’t up to the task of helping him out. However, while Burke’s numbers look quite good and it’s tough to argue the fact that he had a good game, there was one thing missing: getting into the lane. Penetration is Burke’s bread and butter, and when he’s not doing that, Michigan struggles. Michigan State’s M.O. on Tuesday was to keep Burke out of the lane, and they did just that, relegating him mostly to long jumpers that failed to open anything else up for his teammates. They did this by hedging extremely hard on all ball screens and keeping Michigan’s action around half court. Give the Spartans credit: they simply didn’t let Burke turn the corner on the hedge like he does for most teams implementing the same strategy. There was also the issue of Burke getting into early foul trouble, and his subsequent benching by John Beilein. There has been a lot of hemming and hawing about Beilein’s tendency to sit players when they pick up quick fouls, and in this case it clearly wasn’t the right move. However, I would caution against giving the decision to bench Burke in the second half too much importance. Michigan lost for plenty of reasons — that probably didn’t help, but it far from a major storyline.

As a team, Michigan State didn’t shoot the ball particularly well from deep, but Gary Harris did. The Spartans made seven of their 20 attempts, and five of those makes came courtesy of the Fishers, Indiana native. We keep hearing about the bum shoulder and back spasms that have been plaguing Harris all year, but he’s averaging 13 points per game in league play, connecting on 52% of his triples. While it’s true Harris isn’t slashing to the cup nearly as much as he’s capable of, the injuries have certainly not affected his jumpshot. For most of the first half, the freshman was guarded by Nik Stauskas. The Spartans ran Harris through a myriad of screens to get him open looks, and Stauskas simply couldn’t find his way through many of them, giving up open looks. However, not getting through picks was a misdemeanor compared to the felony of ball-watching. Both Tim Hardaway Jr. and Nik Stauskas were caught watching the ball far too often, and they would lose track of Harris as a result — given that Harris is by far the team’s best shooter, this oversight is pretty much inexcusable. It’s good to be aware of the ball and know where the action is taking place on a given possession, but when you’re guarding a shooter as lethal as Harris, you simply can’t risk leaving him open.