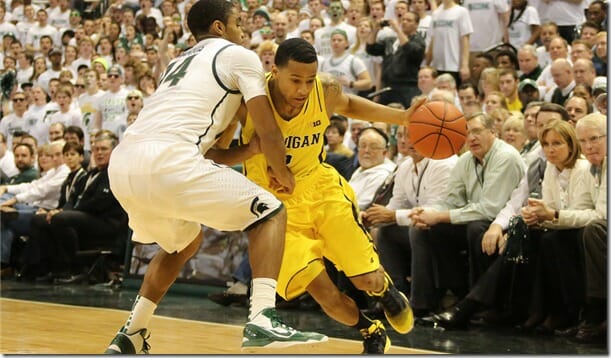 “We got killed, man, and it’s embarrassing that everyone was watching on national TV. We just got embarrassed.” – Tim Hardaway Jr. (via Kyle Meinke)

There’s nothing more to say: Michigan State punked Michigan in East Lansing on Tuesday evening. The Spartans beat the Wolverines 75-52 and even that score line was generous.

Michigan looked like a team that would rather walk through offensive sets against air while Michigan State hit the Wolverines in the mouth, going for the kill from the opening tip.  The difference in intensity, execution and emotion was clear early on and a rabid Breslin Center crowd – described by long time Michigan State scribes as being as loud as it’s ever been – relished every second.

Michigan’s performance conjured memories of past Wolverine embarrassments in East Lansing rather than inspiring talk of a rivalry renewed or the first meeting of intra-state rivals as top ten heavyweights. There have been plenty of humbling moments in John Beilein’s tenure but this loss, at this time, with this team was as disappointing as any during his six years in Ann Arbor.

Michigan’s freshmen looked shell-shocked and its most experienced player, Tim Hardaway Jr., somehow looked even more rattled in his third trip to the Breslin Center. On the other side of the court, the Wolverines had no defensive answer from the dominant inside-outside attack of Derrick Nix, 14 points, and Gary Harris, 17 points.

The four factors do the game justice. Michigan State dominated in all facets.

Michigan’s offense was painful to watch and the Spartans did a tremendous job of not just guarding one-on-one but making every switch and rotation. Ohio State and Wisconsin defended Michigan well but Michigan State’s defensive performance was by far the most thorough and dominant of any team that the Wolverines have faced this season. Poor shooting, lack of free throw attempts and subpar offensive rebounding have all reared their head at one point or another this season but the agonizing statistic on the box score was the turnover. Michigan gave the ball away on a quarter of its offensive possessions, its worst turnover rate of the season. This team’s identity is rooted in not turning the ball over and those 16 turnovers (which led to 15 points) show just how badly the Wolverine offense struggled.

Trey Burke scored 18 points on 11 field goal attempts and was very good offensively. However, his teammates combined for as many turnovers (14) as made field goals on the night, going just 14-of-42 from the floor.

Defensively, it was a perfect storm. Michigan clearly had no answer for Derrick Nix (although the second half double team probably should have been brought out a lot sooner) and Gary Harris continued his torrid three point shooting. Michigan’s sheer inability to box out, allowing Michigan State to rebound 37% of its misses, turned Spartan possessions that didn’t end with a Harris three or Nix half hook into additional easy baskets. The Spartans outscored the Wolverines 18-4 in second chance points and across the board out toughed Michigan for most offensive rebounds. The Wolverines have been a great defensive rebounding team this season but looked hapless on Tuesday evening.

Nine Spartans scored and seven grabbed at least one offensive rebound in a game where many Michigan State pundits hypothesized that Tom Izzo was unlikely to play more than six or seven players.

There are no hidden positives to take from Michigan’s performance in East Lansing – the Wolverines were dominated – but the loss counts just the same as an against-all-odds defeat in Madison. After a grueling four game stretch, it’s officially gut check time for John Beilein’s team.

Michigan just played road games at Indiana, Wisconsin and Michigan State with a home game against Ohio State sandwiched in the middle of the 10 day span. That’s 170 minutes of basketball as difficult as any other team in the country will play this season with barely enough time to breath. That’s not an excuse, it’s a fact.

Going 1-3 in that stretch eliminates any margin for error down the stretch but if the Wolverines can snap out of their funk there’s plenty to play for. Michigan plays just three games in the next 15 days; two against winless (in Big Ten games) Penn State and the other at home against Illinois. Rest, recovery, extra practice, players only meetings, film sessions or meditation; whatever Michigan needs it has the next two weeks to figure things out.  Navigating those games with a perfect record will setup a revenge stretch with home games against Michigan State and Indiana bookending a trip to West Lafayette.

If Michigan can regain some confidence, get Jordan Morgan healthy and begin to resemble the team that we saw for the first 21 games of the season then the Wolverines are capable of winning out. Even after Tuesday’s defeat, Michigan should still be favored in most, if not all, of its final six games. But that all depends on how this team can recover.