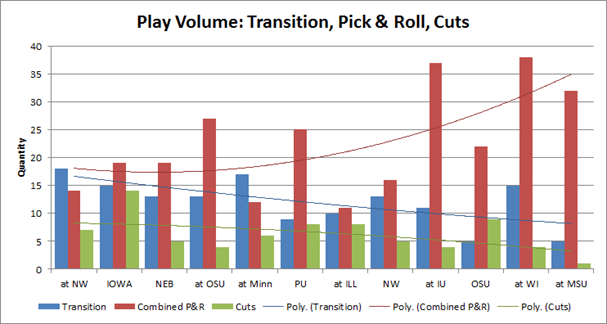 Perspective is paramount over the course of a 30-something game college basketball season. Managing to maintain perspective without getting caught up in the highs and lows of the last game is idealistic at best. Getting wrapped up in the emotions of a come from behind victory or a devastating defeat is a natural reaction after all. The emotions that surround the unpredictability of college basketball are what draw us to game, and make March the best month of the year, but they need to be embraced cautiously before then.

Daniel Horton’s 39 points against Illinois were supposed to send Tommy Amaker’s Michigan team to the NCAA tournament for the first time. Josh Gasser’s bank shot was supposed to pop Michigan’s tournament bubble in 2011. Purdue’s win at the Crisler Center was supposed to end Michigan’s Big Ten Championship hopes last winter. These events prove that jumping to conclusions in the middle of February is a risky proposition at best.

Michigan went from No. 1 in the country to losers of three of four. The schedule was tough but losing three games in 10 days should be a disappointment to any team that spent the first 15 weeks of the season in the top five. Michigan isn’t as bad as it looked in East Lansing on Tuesday, and might not be as good as it looked before February, but there are obviously legitimate concerns. To take a closer look I crunched some numbers to look at primary issues with Michigan’s offense and defense in its troubling four game stretch.

Michigan has scored just .99 points and allowed 1.11 points per trip over the last four games. Those numbers are jawdropping when compared to the 1.21 scored, .95 allowed, per possession marks that Michigan accumulated over its first eight conference games. Michigan went from outscoring its first eight opponents by .26 points per trip, to being outscored by .12 points per trip. The offensive regression is more dramatic but at times it feels like the defensive struggles are even more important.

Michigan’s two point defense has fallen off of a cliff. The Wolverines went from one of the league’s best interior defenses to the very worst.

These numbers are worrisome because two point field goal percentage defense feels like a statistic that never lies. If the opposition is making a majority of its two point shots, that means that they are probably getting a lot of dunks and  layups. My nonscientific assessment is that there’s a strong correlation between missed defensive assignments and strong two point shooting.

This is a problem that Michigan needs to figure out. Part of it might be youth – Michigan is now playing five freshmen and a redshirt in its rotation – and another part might just be that Michigan lacks any dominant defenders.

On January 16th, I broke down Michigan’s individual defense using numbers from Synergy Sports. Obviously those numbers included a lot of non-conference play so some regression is expected but here’s how the numbers have changed:

This table isn’t particularly enlightening but it heaps a lot of praise on Jordan Morgan. According to Synergy Sports, there’s no doubt who Michigan’s best and most consistent defender is. When we published the article the first time around the hypothesis was that could be some sort of statistical noise. After watching Morgan play 17 minutes in the last six games, it feels like maybe the numbers are accurate. Michigan’s three worst defensive performances of the season have come in the last four games and the Wolverines continue to look porous.

It’s also clear that Big Ten teams have been picking on Stauskas of late. Opponents have scored 59 points on their last 55 possessions against the freshman. That’s 1.07 points per possession used compared to the .602 mark on his first 123 possessions. LeVert is another Michigan freshman that has really struggled on the defensive end of the floor.

Defense is nearly impossible to quantify individually, so these numbers must be taken with a grain of salt. However, watching the adverse of Morgan’s absence makes these statistics feel like they make a lot more sense.

Michigan’s offensive efficiency, adjusted for competition, has dropped from first nationally to third over the last two weeks. The Wolverines are no longer even the most efficient offense in their own league, now trailing the Indiana Hoosiers. And while Michigan has played the 4th, 11th, 17th and 18th ranked defenses over that time, it’s clear that the once crisp Wolverine offensive machine is sputtering.

Michigan’s shooting numbers have dropped and the Wolverines aren’t attacking the offensive glass or getting to the free throw line as often as they did early on. It’s no secret that the numbers have regressed but the larger question is how – and why – has Michigan’s offense ran into trouble. To take a closer look, we broke down the Synergy Sports numbers to look for trends about how the Wolverines are initiating offense and what has changed.

There wasn’t much to see in offensive rebound opportunities, spot up jump shots or post touches (Michigan still averages just 2.5 post opportunities per game). However, the movement in combined pick and roll (ball handler + roll man), transition and cutting possessions was blatant.

As the Big Ten season has worn on, Michigan has seen dramatically fewer transition opportunities combined with a stark increase of pick and roll possessions.

The open drop offs, cuts and dishes around the basket have all but vanished against the strong teams on Michigan’s schedule. The Wolverines average 3.25 cutting possessions per loss compared to 7.75 per Big Ten win. More than any other stat,

These numbers are particularly troubling because transition (1.21 PPP) and cutting (1.18 PPP) possessions are two of three most effective play types in Michigan’s offense. That should come as no surprise as shots cutting to the basket or in transition are generally layups, dunks or wide open three pointers. The Wolverines are still the best pick and roll team in the Big Ten but the pressure of efficiently running the pick and roll  has sky rocketed without the easier chances.

Robinson’s by far the most effective when cutting to the basket or finishing in transition. By wiping those plays out of the offense, opposing defenses have been able to neutralize Robinson, who is averaging just four points per game in Michigan losses. Not only have opponents been able to take away his most efficient production, his spot-up ability has also taken a hit as his confidence has fallen. In plays categorized as “spot up opportunities” by Synergy Sports, Robinson is just 1 for his last 8 chances.

The real question is what can Michigan fix? With rest and recovery combined with some potentially confidence boosting games on the schedule over the next two weeks, John Beilein will be looking to alleviate some of these concerns before the Michigan State rematch on March 3rd.

Improvements on the defensive end of the floor should catalyze offensive improvement. More stops, more clean rebounds and more turnovers will all lead to more transition offense and flow. Now that we’ve seen how teams “break” Michigan, it’s clear that this team’s identity is transition offense spearheaded by sound and steady defense and rebounds. This year’s Five Key Plays are littered with plays like this:

When Burke or Hardaway is pushing the ball with confidence in transition, Michigan is nearly impossible to stop. Stauasks with corner threes, Robinson with big dunks, Hardaway with trailing threes. Michigan needs to find a way to regain that swagger and confidence to finish the season on a high note.