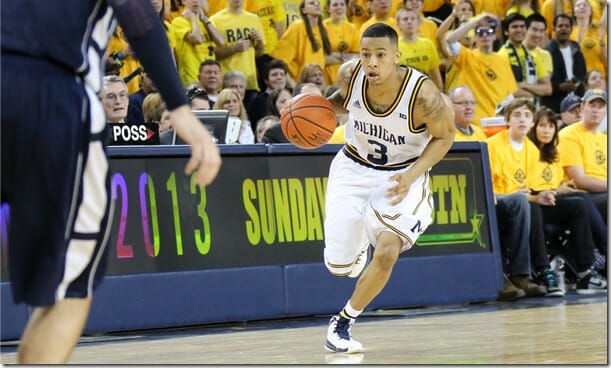 There are no bad wins in the Big Ten but Michigan continued to look like a team searching for its former self while limping past Penn State on Sunday afternoon. The Wolverines’ early season confidence and swagger is gone and a struggling defense becomes a more pressing concern with every passing game.

Michigan is two games out of first place and still has the opportunity to host both teams that it’s chasing in the standings. The Wolverines have been nearly flawless at home over the past two seasons and are capable of winning out – if they can find their early season form.

But despite all of the opportunity ahead, it’s hard not to ask the obvious question: Does Michigan still have that extra gear that was apparent throughout the first two thirds of the season or has it been sapped away by a grueling two week stretch? That confidence isn’t going to return overnight but a rematch against Michigan State awaits in two weeks’ time. A meager eight point win against the league’s worst team isn’t going to accelerate the recovery process but it’s a step, ever so small, in the right direction.

Michigan’s offensive efficiency improved exponentially over the course of 40 minutes but its defense followed an inverse trajectory. After both teams managed roughly a point per possession in a first half that felt like it was dominated by Penn State, Michigan’s offense exploded for 1.38 points per trip in the second half. But the Wolverine defense sputtered and allowed Penn State, the least productive offense in the Big Ten, to score 1.14 points per trip in the second 20 minutes.

The Wolverines have now surrendered 363 points in their last 332 defensive possessions over a five game  stretch included games against the conference’s 1st, 3rd, 5th, 9th and 12th best offenses. When extrapolated to the entire Big Ten season, that 1.09 points per possession allowed would rank second to the last in the conference – just a hair better of Northwestern.

Michigan’s defensive woes continued to originate around the basket, as the league’s worst two point defense failed to improve even against the worst two point offense in the conference. Penn State made 49 percent of its twos on the day and seemed to have endless opportunities around the basket. The Wolverines’ aggressive overplayed, high hedge on the pick-and-roll did generate a few turnovers, which led to 10 points, but it also led to a number of wide open layups at the hoop. Sasa Borovnjak was particularly effective slipping to the hoop, scoring 17 points on 7-of-9 shooting. Although neither DJ Newbill or Jermaine Marshall had particularly efficient offensive performances, Michigan struggled to stop either player’s dribble penetration.

The offense was flat from the opening tip off but rounded into form steadily.  Penn State is far from the best the Big Ten has to offer defensively, but Michigan’s 1.17 points per trip was the second best offensive output the Nittany Lions have allowed in Big Ten play. Michigan shot 35 free throws to 49 field goals, a higher proportion of FTAs to FGAs than we’ve seen Michigan accumulate since February of 2011. The 35 free throw were more than the 26 that Michigan attempted in the last four games combined but it’s probably safe to say that has more to do with a Penn State team that fouls more than anyone in the country than a new found ability of the Wolverines to get to the charity stripe.

Despite its efficiency, Michigan’s offensive production was strikingly unbalanced. Burke, Robinson and Stauskas combined for 86% of Michigan’s scoring and nine of 12 assists. The trio combined to go 20-of-31 from the floor (73% effective field goal percentage) and 23-of-26 at the free throw line while their teammates went just 3-of-18 from the floor and 4-of-9 at the line. Michigan’s inside players – Morgan, McGary, Bielfeldt and Horford – didn’t score combined for 0-of-5 shooting with three turnovers to six rebounds at the five position while Tim Hardaway Jr. was unable to snap out of his off week. Unbalanced offense might not be ideal but it’s tough to complain Michigan’s most efficient players – Burke, Robinson and Stauskas – have the most opportunities and make the most of them.

Michigan has a week of rest before hosting Illinois next Sunday. The Wolverines plan to take the day off on Monday and Thursday with a “mini-camp” sandwiched between. The week off should provide a valuable opportunity for both rest and defensive repetitions before Michigan hosts an Illinois team trending in the right direction down the stretch.