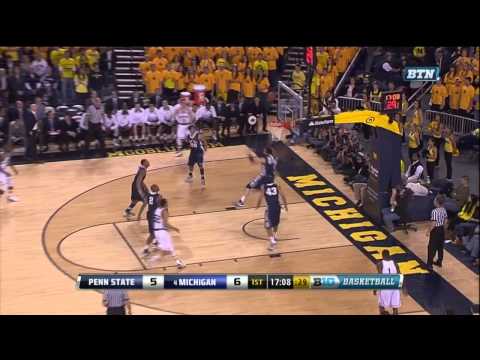 1) Trey Burke keeps Michigan afloat in the first half

There were many words to describe Michigan’s scoring output in the first half: meager, anemic and tepid all work. However, without Trey Burke, it would have been nearly non-existent. Burke was the only Michigan player who was able to get anything going on offense in the first half, scoring 10 of his team’s first 14 points. The Wolverines hovered around one point per possession in the first frame, not even close to their usual rate of production. In the clip above we can see how Burke was able to get going with 14 first half points and two triples.

Burke finds himself on the receiving end of passes to the corner, where he buried two of his 3-pointers, but he remains most effective in the transition game. Burke has a true talent for dictating the pace of a given possession, and he did a good job of setting the Nittany Lions defense on its heels before they could set up the zone they were running. Burke can score in many ways in transition. His pull-up jumper has a higher degree of difficulty than it looks, with his momentum going toward the basket; the lefty lay-up off the high glass is undoubtedly one of the “circus” shots Penn State head coach Pat Chambers was referring to in the post-game presser; but perhaps his toughest shot came after he tears down a defensive rebound, starts the break and hits falling away with two defenders all over him. Burke was spectacular on Sunday, as usual, and he was the only reason Michigan was still in this game in the first half.

With about six minutes remaining in the first half and despite Trey Burke’s best efforts, Michigan’s offense was listless, its defense was poor and the Wolverines badly needed a shot in the arm. In what would become a running theme of the day, Glenn Robinson III was happy to oblige. With his team down four, Burke brought the ball up the court and saw the Penn State was in a 2-3 zone. A zone’s effectiveness obviously varies by team, but a 2-3 seems especially conducive for Robinson because he’s not being harassed physically throughout the game and it provides opportunities for him to sneak behind the defense and run the baseline — exactly what he does on this alley-oop from Burke. Burke makes an oh-so-subtle move to his right toward Caris LeVert, and that’s enough to draw Travis Ross out of position and give Robinson room to cut baseline toward the basket. Sasa Borovnjak gets caught ball-watching and has no idea Robinson is behind him. By the time the Nittany Lion big man knows what’s happening, Robinson is at eye-level with the rim. This is exactly the kind of basket that was so common for Robinson earlier in the season but have been tougher to come by of late. On the other end, LeVert makes one of Michigan’s few big plays on the defensive end by sliding under DJ Newbill after he left the ground to draw a dubious charge call. The freshman has been struggling in limited minutes, but you can’t say anything about his effort. These two plays touched off a comeback for Michigan that saw the Wolverines tie the game at halftime.

Mitch McGary had a forgettable night offensively, failing to score and blowing some bunnies in 20 minutes. However, as usual, his stats don’t tell the whole story. McGary showed Michigan fans a glimpse of still more offensive versatility than we’ve seen thus far, this time in the form of excellent passing. In the process, he also showed some of that “sixth sense” awareness he and Glenn Robinson III share from playing alongside each other for so long. On the first play, Trey Burke gets McGary the ball in an awkward position, with two Penn State defenders draped over him. McGary actually commits a fairly big no-no when he dribbles the ball in traffic, but he picks up the ball and sees Robinson, once again, cutting baseline. McGary deftly looks away and then rifles a strike between two Penn State defenders to Robinson, who finishes with one hand over Borovnjak. The next play is more classic McGary hustle: the freshman goes after a ball that’s been tipped out, gets on the floor among two Penn State players, somehow comes up with it and makes a perfect pass to Caris LeVert as Michigan streaks down the court, resulting in an intentional foul and free throws for Nik Stauskas. The third pass was perhaps the best, when McGary, closely defended at the 3-point line, sees Robinson making a back-door cut. McGary fits the pass in between Robinson’s man and the help and Robinson is fouled. A common theme in this sequence is McGary not losing his cool under pressure, something he had trouble with against Michigan State.

4) Glenn Robinson III ignites the offense in the second half

After taking constant questions about his lack of production over the past few weeks, it was easy to see the usually-stoic Glenn Robinson III was throwing down dunks with a little extra authority against Penn State. The freshman had one of his best games of the season against the Nittany Lions on Sunday, scoring 21 points and pulling down 10 rebounds without missing a field goal. This was after mustering double-digit scoring in just one of Michigan’s previous four match-ups. The Robinson who showed up against the Nittany Lions looked like the Robinson of old, scoring points mainly off of cuts to the basket, rebounds and alley-oops. While it was great to see Robinson get back to being aggressive and opportunistic, it remains to be seen whether or not he can duplicate this sort of effort against the Big Ten’s elite teams (we’re not including Minnesota in this category, in case that’s in question). One particular play was an interesting case of some different action the coaching staff is running to get Robinson an open look. Take a look at the second play of the sequence. Michigan swings the ball left side to Nik Stauskas, where LeVert posts up in the middle. This draws the attention of the defense to the left side as Robinson slips toward the basket. Nick Collela notifies Brandon Taylor of Robinson cutting into his zone, but before Taylor can react properly, McGary sets a screen on him, freeing up Robinson’s path to the basket. It’s essentially a back screen, but it’s a nifty play with an excellent result for Michigan. Michigan wins when Robinson scores; in all four of their losses, Robinson has been in single digits. It appeared Robinson is on his way back from a slump, which is good news for the Wolverines.

Glenn Robinson III wasn’t the only freshman who carried the Wolverines offensively in the second half. Nik Stauskas, who has encountered struggles of his own of late, contributed 18 points on 5-of-9 shooting to go along with four assists. 12 of his points came in the second half, as did his only two makes from beyond the 3-point line. His two triples couldn’t have come at better times for Michigan as Sunday’s game was in doubt well into the second half. With Penn State and Michigan tied at 38 early in the second frame, Stauskas nailed his first three. After grabbing the 41-38 lead on that shot, Michigan never trailed in the game again. However, Michigan’s defense in the second half continued to be porous, and the Wolverines weren’t quite out of the woods. After opening up an eight-point lead, Michigan allowed Penn State to claw its way back to within one. After a Tim Hardaway Jr. layup to extend the precarious lead to three, Stauskas hit another huge triple to further add to Michigan’s breathing room. When he wasn’t feeling it from outside in the first half, Stauskas did the right thing and got to the basket. He made some free throws and layups, which is the quickest way for a shooter to get a rhythm going after missing a few. Stauskas and Robinson combined, along with Trey Burke, to dispatch Penn State in ugly but effective fashion on Sunday.