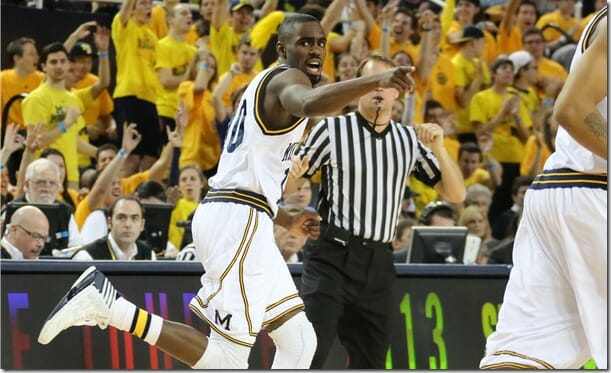 It has been a frustrating couple of weeks for Michigan basketball fans. The Wolverines have dropped three of their last five games. The two wins weren’t particularly inspiring while the losses were particularly impactful for their own reasons. Michigan finds itself at No. 7, outside of the top five for the first time this season, in both polls and also off of the top seed line in most major bracket projections for the first time this season.

While Michigan (and Michigan State) appear to be all but assured to open tournament play at The Palace of Auburn Hills, regional draws become very interesting. Indiana’s emergence as the top overall seed means that the Hoosiers are likely to play in Indianapolis. A No. 2 seed from the Big Ten won’t play in the same regional as the Hoosiers so that means the Wolverines could be looking at a further trip for a potential Sweet 16 game in Los Angeles, Washington D.C. or Cowboy Stadium.

Find the latest bracketology updates and a look at the Big Ten NCAA tournament picture after the jump.

The Big Ten is the best conference in college basketball. In our Big Ten Roundup earlier this week we pointed out that the league features eight teams in Ken Pomeroy’s top 30. It should come as no surprise that the 8-of-12 ratio compares favorably to other leagues. The Big East comes closest with 6-of-18 schools in the top 30 while the ACC (12 teams) and SEC (18 teams) both have just three KenPom top-30 teams. The question is how that will translate to the NCAA tournament picture.

There are no days off in the Big Ten and that fact could damage some resumes. There are several Big Ten teams – both at the top and on the bubble – that could be heavy on not just substance but also unexpected blemish.

The Big Ten last had two No. 1 seeds in 2001 and regardless of how things play out it would be tough to imagine that at least two of Indiana, Michigan State and Michigan deserve a No. 1 seed come Selection Sunday. Obviously conference strength alone isn’t a metric used for inclusion in the post season field but could a league like the ACC get two No. 1 seeds while the Big Ten gets only one? Miami’s undefeated (to date) conference campaign is impressive but that’s still a team that lost to Florida Gulf Coast and Indiana State. Duke is a good team, that’s been without Ryan Kelly for an extended period of time, but are the Blue Devils, even if they win out, worthy of a No. 1 seed over the Big Ten’s second best?

The other question is whether the Big Ten could grab three No. 1 seeds. That’s a feat which last occurred in 2009 with Louisville, Connecticut and Pittsburgh earning No. 1 seeds but it would be impressive from a league with only 12 schools. The chips would have to fall just right – perhaps a three way tie with two of the top three meeting on Sunday in Chicago – but that would be an emphatic first step toward the Big Ten’s first National Championship since 2000.