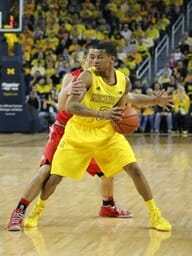 The Player of the Year race still feels wide open.

While Michigan sophomore guard Trey Burke still has a hold on the top spot in the fourth Player of the Year poll, comprised of voters for the AP, Naismith, Robertson and Wooden Awards, a gaggle of people are keeping pace, most notably Indiana guard Victor Oladipo.

The junior entered the poll two weeks ago in fourth place and moved to second in our panel of 51 voters, including being in first or second place on every ballot but one that came in after Indiana’s 72-68 win over Michigan State on Tuesday night.

Cody Zeller leads the Ken Pomeroy Player of the Year calculator with Burke in third and Oladipo in fifth.