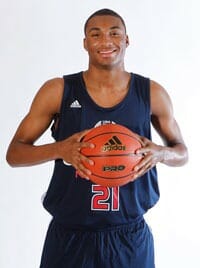 Class of 2013 Michigan commitment Zak Irvin has had a successful senior season by almost all measures. Irvin is averaging 25 points and nine rebounds per game while leading Hamilton Southeastern to a 16-3 record thus far. Irvin hasn’t just kept playing well without current Michigan State Spartan Gary Harris alongside of him in the HSE backcourt, he’s flourished. We caught up with Kyle Neddenriep of the Indianapolis Star to discuss Irvin’s improvement in his senior season, chances of winning Mr. Basketball in the state of Indiana and much more.

How much has Zak Irvin improved over the last year? What stands out as his biggest individual improvement?

I’ve always liked Zak’s ability to defend and shoot from the outside. He likes the challenge of guarding the best offensive player on the other team and he’s had that mindset since I first saw him as a freshman. On offense, he’s always had a reputation as an outside shooter. At times, even though he is a very good outside shooter, he was too reliant on it. Even last year as a junior, I didn’t think he attacked the basket enough. To me, that area is his biggest improvement. He’s not afraid to take his man off the dribble or cut to the basket for a pass instead of waiting for the 3-pointer. He’s much more well-rounded now and such a tough matchup with his combination of size and skill.

The question for Irvin entering this season was how he would play without Gary Harris by his side, has he answered that challenge?

Yeah, I think he’s more than answered it. I’ll admit I had my doubts coming into the season as to how successful Hamilton Southeastern could be this year, even with Irvin coming back. There were a lot of new faces. But it’s been a really smooth transition (as shown by a 16-3 record). Zak has definitely matured into a leader. He lets negative plays roll off his back and moves on. He’s not shy about saying something to a teammate. Zak obviously benefited from playing with Gary, but I think he’s also embraced the role of being “the guy” this year.

Should Zak Irvin win Mr. Basketball? Why or why not?

If you’re asking me right now, today, I think he does. I’m keeping an open mind to see what others do in the tournament, especially Notre Dame recruit Demetrius Jackson of Mishawaka Marian. Jackson is very good, obviously; he’s a McDonald’s All-American. He doesn’t have the talent around him that Irvin does, either. But for Irvin to put up 24.6 points, 8.7 rebounds, 3.4 assists and shoot 51 percent from the field against one of the toughest schedules in the state is pretty impressive. His season stacks up with anybody.

What position do you see Irvin playing at the college level?

Shooting guard. Michigan plays a more interchangeable style than many teams, but Zak can defend guards so that will allow him some flexibility position-wise. He’s only going to get stronger once he gets into a college weight program. I don’t think he’s even approached his potential yet.

What are your thoughts on just how important the state of Indiana’s high school talent is to the Big Ten? Two of the top three scorers in the Big Ten hail from Indiana. Four of the top five freshmen scorers hail from Indiana and that doesn’t even include guys like Mitch McGary and Yogi Ferrell playing key roles for contending teams.

There’s no question Indiana is a battleground state, more than it’s ever been. Not only are Indiana and Purdue locked in on every big-time recruit in the state, but also Michigan, Michigan State and Illinois are almost like in-state schools with the presence they have here. All of the Big Ten schools make Indiana a priority, to an extent. Plus, Butler is here as well and Louisville is right now the road. There’s a ton of competition here.

From an Indiana perspective, how much impact has Michigan’s recruiting push been in the state. Michigan has three freshmen from the state, just graduated Zack Novak and Stu Douglass, and brings in Irvin next year. Do you think that could make an impact on future classes or will in-state ties always hold a trump card.

The Michigan staff makes recruiting in Indiana a priority. Most of these kids grow up watching the Big Ten and dreaming of playing in the Big Ten someday. Indiana and Purdue may have an advantage because they are in-state, but ultimately it comes down to relationships. Michigan’s staff has shown it can build those foster those relationships and get kids on campus for visits. Michigan doesn’t make those early offers like some of its Big Ten competition, but that hasn’t seemed to hurt. The staff clearly has a strong reputation around here.