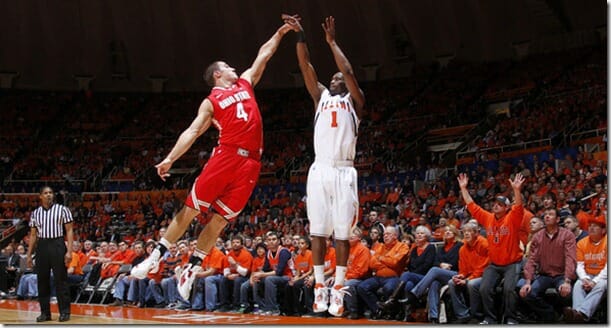 Michigan gets back to the court on Sunday to face Illinois after a much needed week off. Despite playing 13 of 18 games, a Michigan win would be just the second two-game Big Ten sweep for the Wolverines this season. While Michigan is sputtering just a bit, there’s little question that Illinois is surging and could provide a sterner test than the Wolverines faced in Champaign when they cruised to a comfortable 14 point road win.

The variance in performance of a perimeter oriented team is no new phenomenon to Michigan fans. Live by the three, die by the three is a phrase in which Michigan fans are well versed since John Beilein took charge in Ann Arbor. While Michigan has been significantly less reliant on the 3-point shot in 2012-13, John Groce’s Illini have a newfound love of the long range shot. Illinois attempts 39.4% of its field goals from three point range in Big Ten play and its season has been defined by drastic swings in performance. The Illini opened the season 12-0 with wins over Butler and Gonzaga but lost six of seven games early in conference play. Sitting at 2-7 in the conference, Illinois rejuvenated its season with a home win over Indiana and enters Sunday’s game on a five game winning streak.

The Illinois offense ranks 5th in the Big Ten at 1.02 points per trip and its defense ranks 7th at 1.02 points per trip. At 7-7 in league play, John Groce’s record reflects the tempo free reality. This Illinois team is not the best in the league, but is far from the worst – a quintessential .500 team. The Illini were able to ride out a difficult stretch of games and should be able to lean on early season quality wins over Butler and Gonzaga to make the NCAA tournament with a strong regular season finish.

Offensively, Illinois fits the profile of a three point shooting team that isn’t all that great at shooting threes. The Illini have connected on just 29% of their long range efforts in league play, 9th best in the conference, but are significantly more efficient inside the arc at 49% (3rd B1G). Despite those differences in efficiency, the Illini still prefer the long range effort.  Offensive rebounding has actually emerged as a strength in Big Ten play despite fairly average seasonal numbers. The Illini are rebounding 33% of their misses in Big Ten games, 4th best in the conference. The Illini don’t get to the free throw line often and are just average at valuing the basketball, turning it over on 17.4% of their offensive possessions.

The Illini defense isn’t good at much other than forcing turnovers. In Big Ten games, Illinois’ opponents are coughing the ball up on 21.5% of their offensive possessions. That’s the best forced turnover rate in the Big Ten and Indiana is the only team that comes remotely close. Over the recent five game Illini winning streak, opponents have turned the ball over 74 times in 306 offensive possessions, just short of once every four trips down the floor. Value the basketball against Illinois and the rest should come easily. The Illini rank 10th in effective field goal percentage allowed, 9th in defensive rebounding and 10th in free throw rate allowed.

D.J. Richardson posted single game offensive ratings under 100 eight times over a 10 game stretch starting on December 16th but he’s recently regained form and consistency. Richardson is averaging 18 points per game over the recent five game winning streak and his offensive production has been a major reason for the Illini turnaround. Richardson attempts two-thirds of his field goals from three point range and is the epitome of a long range gunner.

Brandon Paul has actually scored 10 points or fewer in three of Illinois’ five recent wins but John Groce has praised his more selective play. Paul is still a three-point centric player, attempting over half of his field goals from long range, who shows the ability to get to the free throw line. Paul turned the ball over five times against Michigan in the first meeting and struggled after hitting a couple of early threes.

Tracy Abrams was the third Illini player to reach double figures in the first meeting. Abrams is an inconsistent three point shooter (30%) and a good setup man (26.3% assist rate) that struggles with turnovers (23% TO Rate)

After scoring 18 points total in the eight games leading up to Illinois’ five game win streak, Tyler Griffey has emerged as an offensive boost. Griffey is averaging 10 points per game over the recent stretch but his production has tapered with seven and one point outings his last two times out. Griffey has a solid three point stroke and his offensive weapons make up for his shortcomings on the glass.

Michigan’s win in Champaign was fairly comfortable earlier this year. Despite losing Jordan Morgan early, the Wolverines scored the ball effectively – 1.14 points per trip – and defended Illinois fairly well – .92 points per trip. Michigan made its twos, was strong on the offensive glass and four players reached double figures. Defensively, Illinois struggled from three point range (23%) but was effective on the offensive glass, rebounding 41% of its misses. The red flag is Michigan’s subpar defensive rebounding in the first meeting. That could prove problematic if Illinois gets hot from three point range in the rubber match.

Ken Pomeroy gives Michigan an 83 percent chance of defending home court, predicting a 76-65 Michigan win. With a week to prepare, this should be a critical game for Michigan to regain its confidence and swagger headed into the final stretch of league play.