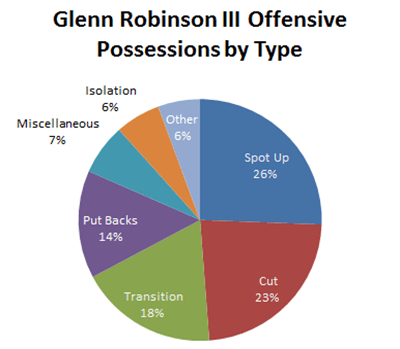 By most measures, Glenn Robinson III has had a very successful freshman season. The young forward is great at using his elite athleticism and high basketball IQ to score with extreme efficiency, mostly through cuts to the basket, put backs off of offensive rebounds and opportunities in transition.

Like all freshmen, Robinson has experienced his ups and downs – part of the learning process in a player’s first year is developing consistency. However, there is a somewhat disturbing trend to Robinson’s ups and downs this season. As Luke Winn pointed out in this week’s power rankings, Robinson tends to play very well against lesser competition, but has virtually disappeared when playing elite-level Big Ten teams:

Robinson further proved this point by having his best game in over a month on Sunday — against Penn State, the Big Ten’s worst team. Robinson was back to his old self with a gaudy stat line of 21 points (on perfect shooting) and 10 rebounds, but Michigan fans have yet to see him put up those kinds of numbers against a top-notch opponent.

The answer to the first question appears to have two parts. First, and most obviously, teams near the top of the Big Ten standings play great defense. Wisconsin, Ohio State, Indiana and Michigan State are the four best defenses in the Big Ten. It is, of course, always going to be more difficult to score against great defenses than lesser defenses, especially for freshmen. But that doesn’t tell the whole story. It appears Robinson has a more difficult time finding opportunities against these superb defenses than his fellow freshmen, Mitch McGary and Nik Stauskas. Mitch McGary averaged 9.5 points and six rebounds while Nik Stauskas averaged nine points and four rebounds in Michigan’s treacherous four game stretch. Robinson averaged less than five points per game over the same stretch.

Neither of these two freshmen have struggled as drastically or with as much regularity as Robinson against great defenses. Why? One possibility could be the nature of Robinson’s production. When he first hit the scene early this season, it was remarkable how quietly he could put together an impressive stat line. Robinson didn’t need to be the focus of plays to get his points – he took hardly any shots but made them when he did, and his efficiency was through the roof. As we can see from the table below, over half of Robinson’s production comes from put backs, cuts to the basket and in transition.

These are generally characterized as “easy” baskets, where Robinson, or one of Robinson’s teammates, does most of the work before he receives the ball. That characterization is not meant to discredit the skill and effort it takes to find those opportunities. Robinson is a smart player who knows where to be, he makes hard cuts to the basket, he has a nose for the ball and he is a strong finisher in the paint. It’s just that he is usually the one finishing plays, not creating them.

The problem with relying on these opportunities for scoring is that great defenses, like the ones at the top of the Big Ten, are great partly because they take away easy baskets. This leads us back to the second question: How can Michigan get Robinson involved in the offense when his usual scoring methods are taken away?

One answer could lie in the high pick-and-roll. Mitch McGary and Nik Stauskas, two freshmen who held their own against the Big Ten elite Robinson struggled against, are heavily involved in Michigan’s most-used half-court set. Stauskas is extremely effective as the ball handler in high screen-and-roll situations, with Michigan scoring nearly 1.35 points per possession out of those sets, the highest of any ball-screen handler on the team. Mitch McGary is somewhat less effective as the roll man in pick-and-roll sets – Michigan averages .92 points per possession with McGary setting the high screen – but that’s partly due to his propensity to play volley ball off the backboard early in the season and he has been used more often in those situations since Jordan Morgan went down with an ankle sprain.

So what would it look like if Robinson was the screener in Michigan’s pick-and-roll action? Robinson has received the ball as a screener on just three possessions this season, to little success. We dug up video of two of those possessions: the first came against Ohio State in Columbus and the second against Indiana in Bloomington — two games in which Robinson really struggled.


From watching these clips, two things stand out:

One other thing that stands out about these two plays is that they didn’t result in points. Why? In the Ohio State clip, we can see the Buckeyes were “staying home” — staying between Robinson and the basket, playing off him and not being too eager to contest a possible jumper. This conservative defensive game plan stymied Michigan and Robinson the whole game. Even with DeShaun Thomas in good defensive position, Robinson takes the ball to the hoop and isn’t able to finish in traffic. The Hoosiers, on the other hand, play a much more aggressive defensive style — which allows Robinson a wide-open look. Christian Watford helps on Trey Burke, who gets the ball to Robinson. Watford, already out of position, bites on Robinson’s pump fake. Robinson makes an excellent play by taking a step in and firing up the uncontested jumpshot, it just doesn’t go in. The action actually worked quite well, the execution just wasn’t there.

On paper, it seems as though Robinson is a prototypical pick and pop man — he has quick feet and great hands, he’s a good shooter as well as a solid finisher around the basket and he has a high basketball IQ. The reason he hasn’t been used as the screener so much in pick-and-roll situations is because he’s been so good all season at producing off of what John Beilein calls “residual action” off the set — hitting spot-up jumpers when his defenders help off him, receiving dump-offs from Trey Burke and Tim Hardaway Jr. driving to the basket, etc. He’s been a very solid option. However, it’s clear that the class of the Big Ten, which Michigan is competing against, has figured out how to negate Robinson in the role he occupies currently and it’s time to expand it. The most ready option appears to be getting him more involved in the screen-and-roll game as the screener. It appears this is already in the works. When I asked John Beilein about this possibility during media availability on Friday, he said that “It’s action we’d like to use more,” and we “might see it this weekend.”