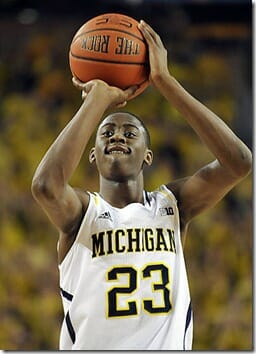 Much of the discussion over the last two weeks has revolved around Michigan’s difficult schedule, tired legs, youth, and the proverbial freshman wall. But the problem was far more severe than any of those issues. The problem was confidence.

Michigan reached No. 1 by playing a brand of basketball that was spirited and fun to watch; extra passes, open shots and easy dunks were the norm. Michigan took the floor with confidence every night, played its game, played it well, and eventually overwhelmed its opponents with its offensive efficiency. After opening February with three losses in four games, the Wolverines began to let doubt creep in.  Every movement offensively was calculated and every defensive rotation was just a second late. That doubt manifested itself in a blowout loss in East Lansing and an underwhelming eight point home win over Penn State.

The Wolverines looked no more closer to regaining that confidence and swagger as they headed to the locker room down three points to an Illinois team which looks every bit like the stereotypical 10-seed Big Ten bubble team. One that should have no chance of winning on the road at Michigan.

But for the final 20 minutes on Sunday, Michigan finally began to demonstrate that swagger once again. First the Wolverines eliminated their first half mistakes – cutting down on turnovers and rebounding every Illinois miss in the second half – then the rest fell into place. Michigan had more plays that screamed “that’s Michigan” – fast breaks off of turnovers, secondary transition baskets generated by strong defensive rebounding and lethal pick-and-roll efficiency – than we’ve seen for the past three weeks combined and slowly but surely the Wolverines cruised to a 13 point win.

Michigan’s offense limped through the first half, failing to reach one point per possession, but exploded for 1.32 points per trip in the second half. That offensive output was fueled by Illinois mistakes and late game fouling but that sort of production is what has propelled this offense all season. Much of the free throw production came late in the game but the Wolverines were unquestionably aggressive in attacking the basket. Michigan attempted just 37% of its field goals from long range and was an efficient 61% on twos, scoring 34 points in the paint and outscoring Illinois 10-0 in fast break points. The first half was ugly but a strong second half was enough to make this a fairly average if unspectacular performance for the Wolverine offense.

Defensively the game shifted on defensive rebounding in the second half. The following graph looks at the four factor offensive performance of the Illini by half.

Illinois rebounded nearly half of its missed shots in the first half compared and didn’t record a single offensive rebound in the second half. Illinois shot the ball just as well, turned it over around the same rate and actually got to the free throw line more often in the second half but Michigan shut down the Illini by eliminating second chance opportunities. Surrendering .94 points per trip, this was Michigan’s best defensive performance since January against Northwestern.

We’ve hypothesized quite a bit over the last several weeks that the absence of Jordan Morgan has been the undoing of Michigan’s defense. Watching today’s game that was strikingly apparent. Plus-minus statistics are a partially flawed metric for individual evaluation because of sample size and external factors but the difference in Michigan’s performance with Morgan on and off the court is staggering.

Michigan dominated Illinois with Morgan on the floor. His hedging, trapping and recovery against Illinois’s ball screen offense was simply phenomenal. He was steady on the defensive glass and while he may have only recorded one steal, it’s clear that Michigan was able to force more turnovers with him on the floor.

Michigan sits at 10-4, two games behind Indiana with four games to play. A share of the Big Ten title is still possible but will require the Wolverines to win out and the Hoosiers to be upset along the way. Next up Michigan is a trip to Penn State against a Nittany Lion squad still searching for its first Big Ten win.