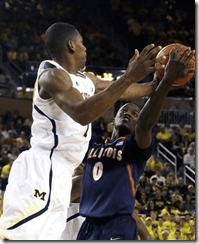 It took Michigan 20 minutes to wake up on Sunday afternoon but the Wolverines finally began to resemble the team that cruised through the first 21 games of the season with just one loss.

In the first half, Illinois dominated the offensive glass, grabbing eight offensive boards for 13 second chance points, while uncharacteristic turnovers bogged down a usually efficient Wolverine attack. But Michigan corrected its problems in the second half. The Wolverines didn’t surrender an offensive rebound in the second half and outscored the Illini 43-27 in the second period to coast to a 71-58 victory.

Illinois hung close through much of the second half until Trey Burke spearheaded a 9-0 Michigan run to extend Michigan’s lead to 12 points with 5:43 to play.

Burke scored his 1,000th point in a Wolverine jersey and led the way with 26 points and eight assists, on 8-of-11 shooting with just one turnover, while Tim Hardaway Jr. and Glenn Robinson III also reached double figures with 13 and 10 points respectively. Jordan Morgan was quiet on the stat sheet (1 point and 6 rebounds) but provided a critical boost to a previously struggling Wolverine defensive unit.