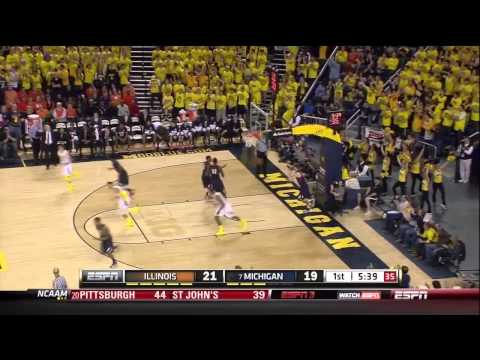 I want to point out something that may seem insignificant but is exactly the reason why Michigan has missed Jordan Morgan so badly. Look at Morgan’s defensive possession at the beginning of this play. Tracy Abrams receives the handoff from Nnanna Egwu at the top of the key. Morgan hedges some, but not much. As he’s getting back to Egwu, DJ Richardson runs through a variety of screens from the left wing, along the baseline, all the way to the right wing. In doing so, Richardson loses Nik Stauskas. If you focus in on the nine-second mark, you can see Stauskas is about the get screened by Joseph Bertrand, leaving Richardson open flashing to the 3-point line. But watch what Jordan Morgan does as he’s recovering to his man — he shows in the passing lane between Abrams and Richardson and denies Richardson the ball for a half a second — just long enough for Stauskas to get back in position. If Morgan doesn’t show for that fraction of a second, Abrams passes to Richardson for an open 3-pointer. Instead, Abrams reverses the ball and the Illini reset. It’s cliché, but that’s the play Morgan makes that doesn’t show up in the box score, and that’s the sort of play Michigan has been missing so dearly from him. Morgan did a bunch of other awesome stuff on this play — his hard hedge and perfectly-timed steal come to mind — but if you want to know why Michigan has struggled on defense the past few games, it’s because no one else on the team besides Jordan Morgan makes plays like that one.

This two-play sequence showed, respectively, why Glenn Robinson III has been struggling and what he needs to do to keep progressing in a positive direction this year. Dylan mentioned in the recap, rightly, that the most glaring difference in the Wolverines earlier in the season and during their grueling stretch of the past few weeks was a lack of confidence. Robinson illustrated that lack starkly on the first play in this clip. At the six-second mark, Jordan Morgan rolls after handing the ball off to Tim Hardaway Jr. at the top of the key. Tyler Griffey, guarding Robinson, elects to help on Morgan, leaving Robinson wide open on the wing. This is exactly the situation Michigan wants. There’s no correct decision for Griffey — he either gives up the  pass to Morgan or gives up the 3-pointer to Robinson. However, Robinson lets the Illini completely off the hook by passing up the wide-open shot. He simply has to at least take those shots — make them or not, doesn’t matter — and establish himself as a threat for Michigan’s offense to work to its potential. It was a dispiriting moment for the freshman, but he makes up for it on the next play. Griffey gets lost in a series of screens and leaves Robinson alone at the top of the key. This time, Robinson makes him pay by stepping into a good-looking shot that found the bottom of the net.

3) Jordan Morgan takes over early in the second half

It sure is nice to see Jordan Morgan taking charges again. Remember how Indiana (in the first half, at least) and Michigan State both seemed to knife effortlessly into the lane against Michigan, with zero consequences? Well, Michigan’s most formidable defensive weapon in the post is back with Jordan Morgan, who took over the “best charge-taker on the Michigan roster” role after Zack Novak graduated. John Beilein cited Morgan’s “anticipation” in the post-game, and no doubt he was referring to plays like the charge Morgan takes against DJ Richardson in the first play in this sequence. On the next play, Morgan makes a great play by slipping Nnanna Egwu in the paint and establishing position in time to grab an offensive rebound over two Illini. A few plays later, Morgan displays his true expertise in the pick-and-roll game, with stunning results. Morgan slips behind Tyler Griffey on the roll following his screen for Trey Burke. Burke finds him with a nice look on the left block, but Morgan is immediately double-teamed.  Morgan somehow registers Glenn Robinson III cutting baseline and slips Robinson a no-look bounce pass, which Robinson finishes in typical emphatic fashion. This is definitely not the kind of play Morgan usually makes, but the redshirt junior was in some sort of zone on Sunday.

More than anything else, what has been missing from Michigan’s offense over the past few weeks was easy baskets resulting from turnovers. Because of their struggles on defense, the Wolverines weren’t finding the runout opportunities that jump-started their extremely efficient fast-break offense earlier in the season. Sunday was a throwback for Michigan, especially in the second half. The Wolverines forced Illinois to turn the ball over on 21 percent of its possessions, and most of those turnovers resulted directly in points. Michigan’s steals were many and they came in multiple forms. First it was Tim Hardaway Jr. getting a hand on the ball as Brandon Paul drives to the lane, leading to an easy layup; then it was Tim Hardaway Jr. again knocking the ball free from behind on an unsuspecting Nnanna Egwu, then getting poked in the eye; there was a hard hedge by Morgan leading to a distracted pass poked away by Glenn Robinson III, who glided in for a slam; finally, Mitch McGary and Caris LeVert do an excellent job of double-teaming Paul and tipping his pass right to Burke, who lays the ball in on the other end. Without a doubt, Michigan relies on its defense to create its best offense. When the Wolverines’ offense is struggling, it’s probably because they aren’t getting fast-break buckets.

It’s a crime that the guy who scored 26 points on 11 shots, handed out eight assists and turned the ball over just once hasn’t had his own play yet, but with this last sequence Trey Burke gets his. In the span of just under one minute, Michigan goes from being up by four points in a tight game to running away with a 12-point advantage thanks mostly to the superstar point guard. It starts when Tim Hardaway Jr. again forces a near-steal, which leads to an awful shot by Illinois. The ball ricochets off the rim toward half-court, where Burke simply beats DJ Richardson to the ball and rewards Hardaway with a great look for a layup. The next play is simple ball reversal — Hardaway has momentum going one way, but gets the ball back to Burke at the 3-point line; Burke buries the contested shot. On the last play of the sequence, Burke sees a lane cutting across the court that no one else does. The sophomore weaves through defenders, leaves his feet, and somehow finds a wide-open Caris LeVert before he lands. LeVert hits the 3-pointer and it’s the most visibly emotional we see Burke all game. Trey Burke was absolutely spectacular on Sunday, and no stretch of the game showed this more readily than this one that decided it.