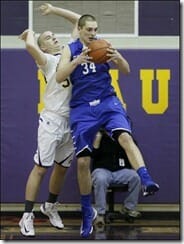 Class of 2014 Michigan recruiting target Devin Booker picked up a big offer on Sunday as Mike Krzyzewski officially extended an offer after Booker’s unofficial visit to Durham for Duke’s win over Boston College.

Booker’s prep season is over and he’s embarking on a five visit tour which began over the weekend at North Carolina and Duke.

Next up Booker will travel to Florida, for its game against Alabama on March 2nd, before a trip back to Michigan. Booker will be in East Lansing on March 7th for Michigan State-Wisconsin and in Ann Arbor for Michigan’s home finale against Indiana on Sunday, March 10th.

Booker averaged 30 points per game in his junior season and is regarded as a five star prospect in the class of 2014. The talented underclassmen plans to take unofficial visits this time around before official visits in the fall.

“This go-round will be unofficial visits,” Booker said. “I’ll see which ones I like and then at the end of the summer, I’ll start cutting them down and see what my official visits will be.”

Here are some summer highlights from our friends at City League Hoops:

Trio of visitors for Illinois win

2014 guard Edmond Sumner and 2015 guards Prentiss Nixon and Chandler White were all in attendance for Michigan’s win over Illinois on Sunday afternoon.

Nixon recently scored 13 points, grabbed five rebounds and four steals in a 60-43 win over Lakota West-East and also took a recent trips to Indiana and Iowa. Nixon Instagramed from the locker room and tweeted that he had a “good visit”.

White recently scored a game-high 17 points including a game winning overtime jumper to help his squad to a win over Warsaw. White tweeted a picture of himself with Trey Burke after the win.

Derrick Walton scored 28 points, grabbed 12 rebounds, handed out 11 assists and picked up five steals in a 78-56 win over Bradford Academy to win the Charter School Conference. Here’s recent footage of Walton in action against Old Redford:

Mark Donnal finished with nine points and eight rebounds in a 58-52 win over Maumee to clinch a Northern Lakes League championship. Donnal faced double teams all night and the NLL crown was Anthony Wayne’s first since 1998.

Zak Irvin had to score 20 points in the second half to lead Hamilton Southeastern to a win over Lafayette Jefferson. HSE is now 17-3 with a perfect 9-0 record in conference play. Unfortunately, HSU opens sectional action against North Central, at 7:30 on February 27th, in a game that pits two of the state’s best team in the first round of playoff action.

The No. 55 player in ESPN’s Class of 2014 Top-100, Marial Shayok, has recently seen increased recruiting attention. With a recent Cincinnati offer, the Canadian native is also hearing from Michigan. Adam Finkelstein reports:

Boston College was the first program to enter the mix in the fall, and when the season tipped off in November, they were still his only offer. Since that time he’s added Villanova, Seton Hall, Rutgers, Providence, Georgia, and now Cincinnati, and all indications are that those offers might just be the tip of the iceberg, with schools like Michigan, Ohio State, and a variety of others closely following the No. 55 junior’s progress.

Bluiett has taken recent trips to Butler, Indiana and Purdue but Michigan continues to recruit the talented scorer. Here are recent highlights of Bluiett in action: