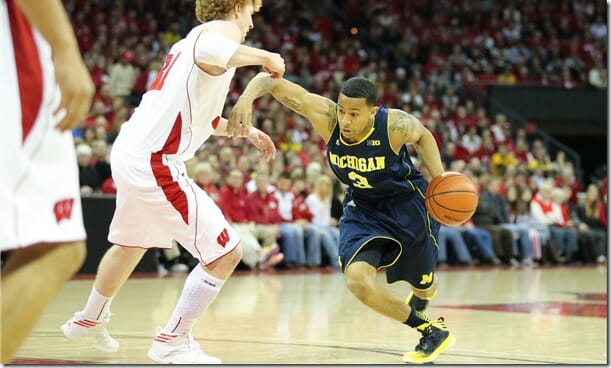 Fire and Ice: Michigan duo of Burke, Hardaway Jr. form top backcourt – “”Tim’s fire, and Trey’s ice,” Michigan assistant coach Jeff Meyer said. “Different personalities … but they have great passion for the game of basketball but they also have what I think is really special — a drive to win, a will to win, that you don’t see in all the kids you recruit.”

A Fresh Five Push Michigan Into the Title Picture – NYTimes.com – “They have come to be called the Fresh Five, a nod to the famous and infamous Fab Five, the college basketball stars turned cultural phenomenon of the early 1990s. The current freshmen joke about it in private. But when they arrived, they were not as heralded. They were not as brash. There were no black shoes, no black socks. They were not the stars of this team. Burke and Hardaway were. Then Robinson made that dunk, and Burke realized he needed them. Thereafter, whenever they were bored, Burke practiced lobbing alley-oops to Robinson, as if he were trying out a new toy. They would make eye contact, Robinson would point up, and Burke would loft the ball. Higher and farther. The crazier the dunk, the better.”

Transfer Evan Smotrycz keeping Terps on their Toes – The Washington Post – ““No. Not at all,” Smotrycz said. “Everyone asks me that: ‘Aren’t you [upset] when Michigan was ranked first and stuff?’ I talk to the guys still, and I’m happy for them. At the same time, I wasn’t leaving because the team wasn’t good. I was leaving to do something for me, and to better myself. I’m happy for them. They could win a national title and I’d still be happy for them. I wouldn’t disappointed at all, because I know I made the right decision.”

The transition offense of college basketball’s top 10 teams – SBNation.com – Cool scatterplots, better analysis: “For the most part, teams that look to run after a rebound are also more likely to shoot quickly after an opponent make. One exception to this trend is Michigan. The Wolverines aggressively push tempo after a rebound, but seldom shoot quickly after their opponent scores.”

2013 NBA Draft – Ranking the top 30 prospects – ESPN – “15. Trey Burke: The Wolverines may have lost three of their past four, but don’t blame Burke. He hasn’t shot the ball particularly well, but he has been his same efficient self elsewhere, averaging only two turnovers per game in his past four games despite playing against some of the toughest defenders (Aaron Craft and Yogi Ferrell) in the country.” Glenn Robinson III slides down to 22 from 18 (updated last week).

Ken Pomeroy, basketball analytics, Virginia Tech: Ken Pomeroy’s tempo-free stats all the rage in college basketball – dailypress.com – “When I first started out, that was the biggest challenge,” he says. “I had all these ideas, and I just felt like there’s no way you can put this on a website and update it in real time. It’s just impossible to manage that information. “I wasn’t a big computer programmer back then either, but I kind of got into it, and (learned) this actually is possible. … It’s a pretty efficient operation at this point. It probably takes 15 minutes to update everything. It really doesn’t require a lot of effort on my part unless there’s an error in the data.”

College basketball’s version of ‘Moneyball’ – ESPN – It isn’t even March and it’s Pomeroy feature week: “Arizona coach Sean Miller trusts those numbers. “The simplifying of statistics helps you coach your team and helps you be more accurate in the things you know you’re doing well and also the things that you aren’t doing well,” Miller said on last week’s Pac-12 media teleconference. “[KenPom.com] … from my perspective, that’s the story of your team.””