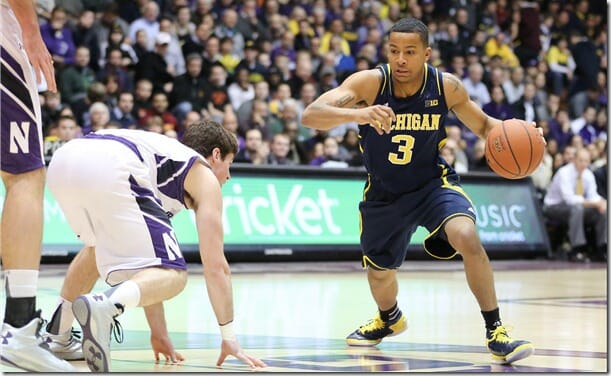 Trey Burke surpassed the 1,000 point milestone on Sunday in Michigan’s win over Illinois – just his 61st game at Michigan. The list of former Michigan players to reach 1,000 points in two years is an impressive who’s who of Michigan basketball of yesteryear.

Phil Hubbard, Mike McGee, Chris Webber, Jalen Rose, Louis Bullock and Manny Harris reached the mark during their sophomore seasons while Cazzie Russell, Rudy Tomjanovich, Bill Buntin and Henry Wilmore managed the feat in their junior season, but played in an era where freshmen were ineligible.

That group includes four of Michigan’s five retired players, perhaps its two most (in)famous former players along with its most productive player of the 2000s. The company is superb at the top but the 1,000 point club alone doesn’t do Burke’s performance in a maize and blue uniform justice.

There are plenty of players that score 1,000 points in two years in modern college basketball but very few managed the feat with Burke’s efficiency. In an era of me-first scoring guards, Burke is a refreshing reminder of how the point guard position is meant to be played.

While Burke hasn’t quite played a whole season yet, his offensive rating (estimated individual points produced per 100 possessions) of 129.3 is currently the best of the Ken Pomeroy era (2003+) among players that used at least 28 percent of their team’s possessions.

Burke’s performance has seen only minimal regression in league play with an offensive rating of 125.8 and an even higher usage rate of 29.2%. Only DJ Newbill has used more Big Ten possessions than Burke, while Victor Oladipo and Glenn Robinson III are the only more efficient players. Given Oladipo (22.8%) and Robinson’s (14.3%) low usage rates, and Newbill’s subpar offensive rating (87.7), Burke is far and away the league’s best combination of volume and efficiency.

His 55 percent two point shooting is unheard of for a 6-foot guard while his 40% three point shooting is well above average for a point guard. His assist rate of 39.6% is the best in the Big Ten and he’s just 49 assists shy of Michigan’s single season record. For a player that controls the ball for the majority of Michigan’s offensive possessions, his 11.4% turnover rate is unworldly.

A true testament of Burke’s balanced approach is that the sophomore guard has either assisted or made 374 field goals this year – 49% of Michigan’s total. His distribution of makes to assists is 50-50 on the nose; 187 made field goals, 187 assists.

Admire the production but do it justice by providing the context of efficiency. Burke’s season has been one for the ages, even if it very well might be his last in Ann Arbor. One thing is clear, Michigan will go as far as its 6-foot guard can take it over the next month.

There have been complaints throughout the season that Burke plays hero ball, takes too many shots or settles for long jumpers late in the shot clock. But John Beilein would be foolish not to have the ball in Burke’s – the most efficient high usage player in the country – hands as often as possible. The supporting cast is great, but Beilein trusts Burke to carry the load – creating his own offense and improving his teammates – through 27 games he’s doing that as well as anyone.

“He’s not hogging shots. There were some games where he’ll talk to me and say, ‘coach, I should have shot less than that’,” Beilein explained on Sunday. “He’s playing the game the right way and he has this confidence about when it’s time for him to go in and get buckets or shoot a three.”

I won’t go as far as saying that Burke proves returning to college is always right decision – for many players it’s not – but at the very least he’s a living demonstration of the best case scenario. Burke was shockingly good as a freshmen but the stakes have changed as a sophomore.