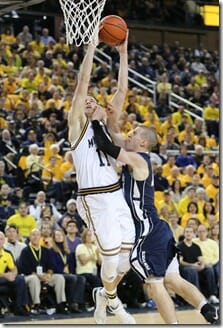 The last time Michigan traveled to Penn State an improbable Sunday afternoon sequence of events led to the Wolverines arriving back in Ann Arbor with a share of their first Big Ten Championship since 1986. This time with four games to play, Michigan is traveling to Penn State in attempts to hunt down another come from behind share of the Big Ten title.

The feat will likely require perfection – including home wins over Michigan State and Indiana – but the odds aren’t impossible. Indiana, the team Michigan is chasing, lost at Minnesota last night and now sits just one game ahead of the second place. The math is simple and reassuring for the Wolverines: win out and they are guaranteed at least a share of the Big Ten title.

The stakes are vastly different for Penn State. While the Nittany Lions have come closer to their first Big Ten victory of the season in recent weeks, they still have a zero in the win column. Penn State has the worst offense in the league and its defense isn’t much better. However, the last time these two teams met, the Nittany Lions gave the Wolverines all they could handle in Ann Arbor.

Penn State is the worst shooting team in the league, both inside and out. The Nittany Lions have made just 41% of their twos and 28% of their threes in league games. However, three of Penn State’s top four shooting performances have come in the last three games – one of which was in Ann Arbor. Turnovers are a concern as the Nittany Lions give the ball away on nearly one in five Big Ten possessions (11th B1G) and while offensive rebounding (9th B1G) and free throw rate (7th B1G) stack up more favorably against the rest of the conference, they are far from strengths. While Penn State has found improved offensive form in recent games, this is still an underwhelming offensive outfit.

Just 10 days ago, Penn State put forth its second best offensive performance of the conference season in Ann Arbor. The Nittany Lions played harder than the Wolverines, who looked fairly lethargic, and when the final horn sounded it was Michigan’s second lowest margin of victory in Big Ten play. With a home rematch ahead, Penn State should certainly have its fair share of confidence while hosting No. 4 ranked Michigan.

In the first meeting, Michigan’s ball screen defense was a major problem. The Wolverines struggled to provide help on the ball screener – both rolling to the paint and popping to the perimeter – and gave up far too many easy baskets. Jordan Morgan (who was held out of practice on Monday) appears to be slowly returning to health and should provide Michigan’s interior defense with a massive boost.

Michigan’s defensive game plan will once again revolve around slowing DJ Newbill and Jermaine Marshall, Penn State’s only double digit scorers. Both dynamic guards can put the ball on the floor, drive the lane, and get to the free throw line. While they aren’t great finishers at the basket, they challenged Michigan’s perimeter defense in the first meeting. Newbill has made six of his last 12 three point attempts over the last three games after opening the season 8-of-49.

Sasa Borovnjak has emerged over the last three games for the Nittany Lions. Borovnjak is averaging 16 points on 20-of-27 shooting over his last three outings after failing to reach double figures in Penn State’s first 11 Big Ten games. The 6-foot-9, 240 pound junior big man is the most effective roll man in the Big Ten, averaging 1.35 points per possession when rolling to the basket – according to Synergy Sports.

The primary three point threat on the Penn State roster is 6-foot-3 former walk on Nick Colella(35%) while Ross Travis (6-6, 225 lbs) and Brandon Taylor (6-7, 230 lbs) are the provide the bulk of the rebounding effort inside.

Ken Pomeroy likes Michigan by a 15 point margin, 74-59, giving the Wolverines a 91% chance of victory. The Wolverines home win over Penn State was far from awe inspiring but a more spirited road effort could provide another building block before Michigan’s critical Sunday rematch against Michigan State.