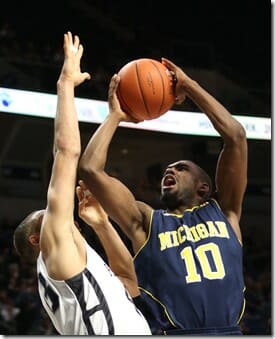 Earlier this week I posted trendlines of every Big Ten team’s performance to date and wrote that Penn State was playing its best basketball of the conference season and was bound to win its first conference game soon. Next week in Evanston against a struggling Northwestern team seemed more likely than at home against Michigan.

Michigan led by 15 points with just over 10 minutes to play and Penn State’s ability to play the Wolverines close for the better part of two games over the last two weeks felt like an heartwarming but insignificant story. Then the wheels fell off. The Nittany Lions outscored the Wolverines 33-12 to close out the game for their first win of the Big Ten season.

This wasn’t the sort of raucous crowd that the Wolverines have faced in East Lansing or Bloomington – the box score listed a generous attendance figure of 8,892 – but the run seemed to snowball so quickly that nobody was quite sure what happened. Michigan players walked off the floor in disbelief as a day that began with rejuvenated Big Ten title dreams ended with even more questions about a struggling Wolverine team that once felt invincible.

What happened to Michigan? A defensive collapse.

Michigan’s offense was bad over the final 10 minutes but its defense was atrocious. Penn State scored 33 points on its final 19 possessions of the game – 1.74 points per trip. The Nittany Lions scored at least one point on 15 of the final 19 possessions. One of the four empty possessions was an 0-for-2 trip to the free throw line, the others included a missed layup, a missed jumper and a turnover that Michigan promptly bobbled out of bounds.

Penn State attempted 18 free throws and made 4-of-4 3-point attempts during that final stretch and the Wolverines looked hopeless in defense.

How bad was Michigan’s defense? This was the Wolverines’ worst defensive outing of the season and it came against the Big Ten’s worst offense. This was just the eighth time this season that Penn State surpassed a point per possession and its 1.24 point per possession output was its best offensive output since December 27th, 2010.

The culprit, once again, was the ball screen. Michigan’s aggressive trapping hedge simply didn’t work. Penn State showed patience  and managed to exploit late help defense after passing out of the trap. Defending ball screens like this is a strategic decision but the results aren’t there. My hypothesis is that Beilein is attempting to cheat to compensate for Michigan’s lack of an elite on-ball defender like Aaron Craft or Keith Appling that can fight over ball screens quickly and consistently. Michigan needs to trap because that’s the only way Beilein is confident he can keep the opposing ball handler out of the lane.  Whether the strategy is right or wrong, the execution is lacking. Michigan’s bigs would trap but they weren’t able to reliably prevent penetration or cut off passing lanes without fouling.

Michigan’s offense was phenomenal for the first 30 minutes but also slowed down the stretch. In the final 6:30 of the game, the Wolverines didn’t make a field goal, turned the ball over twice and missed three free throw attempts.

Regardless of whether the calls were right or wrong, block-charge fouls had a major influence on the game. Michigan took one charge but was whistled for three or four blocking fouls while attempting to draw the charge. On the other end the Wolverines were whistled for three charges. Those 50-50 calls manifested themselves in a number of uncharacteristic Wolverine statistics: Penn State free throws and Michigan turnovers. Michigan turns the ball over and fouls less than any team in the country yet both statistics proved to be the Wolverines undoing at the Bryce Jordan Center.

Michigan gave the ball away on 22 percent of its possessions and allowed the Nittany Lions 27 free throw attempts to 57 field goal attempts.

Michigan’s late game execution left plenty to be desired. The Wolverines committed poor fouls, turned the ball over against Penn State’s trap, and mismanged the clock down the stretch. Despite the late mistakes, Michigan made 66% of its two point attempts and seemed to be capable of getting a layup whenever it didn’t trip over itself. The Wolverines dominated on the offensive glass while missed threes (5-of-20) and sloppy turnovers were the only blemishes on an otherwise solid offensive performance. Michigan still managed 1.15 points per offensive possession, just a hair above its in-conference average, and plenty sufficient to win a game with a moderate defensive effort.

There are plenty of teams with a bad loss on their resume (Kansas, Georgetown and Miami all have losses to sub-top 100 teams). One game doesn’t define a season and it took the Wolverines 28 games to catch a bad loss. However, Michigan’s troubles are concerning. The Wolverine defense has been shredded for the better part of the last seven games and Michigan is starting to look like a team running out of gas rather than struggling through a midseason hiccup. With Michigan State headed to Ann Arbor, it’s starting to feel like Sunday could either spark the Wolverines down the stretch or send Michigan into a nasty downward spiral.