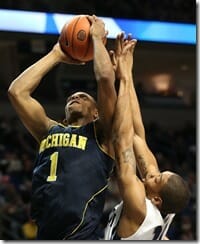 Michigan outshot the Lions (51.7 percent to 47.4 percent) and won the rebound battle 37-30, but had no answer when Penn State got hot down the stretch. Despite 19 points from Tim Hardaway Jr. and 18 from Trey Burke, the Wolverines were felled by the hot hand of Lion guard Jermaine Marshall, who notched 25 points on 8-for-17 shooting, including 6-for-10 from beyond the arc. (Photo: Sarah Finnegan/Daily Collegian)

The Wolverines had 15 turnovers to Penn State’s nine.

“I think you saw today why we all love college basketball,” coach John Beilein said after the stunner. “I’ve been seeing this coming with [Penn State coach] Pat Chambers’ team for the last month.”

Michigan had the flair, scoring several powerful dunks, but not the finish.

Still, things hardly seemed dire for the Wolverines with 17:40 to go. After entering the second half up 39-36, Michigan notched eight unanswered points to jump out to an 11-point lead.

But the Lions wouldn’t be put away. Marshall stole the show with 19 second-half points. Those, along with 17 and 15 overall points from guard D.J. Newbill and forward Ross Travis, respectively, were too much to overcome.

Penn State, a team that averaged a dismal 61.2 points per game entering Wednesday’s contest, ended the game on a 33-12 run.

“They were a better team,” Beilein said when asked what happened down the stretch. “We did not withstand the run. We did not show the things you need to do to be a really good team. To win games at this level, you have to have an awful lot of courage down the stretch and we looked very tentative.”

Michigan now sits two games behind No. 1 Indiana at fourth place in the competitive Big Ten with three games to go. The Wolverines have dropped four of their last seven games, all losses coming on the road.

Jordan Morgan gets the start

Junior forward Jordan Morgan, recovering from an ankle injury, got the start against the Lions. He played 24 minutes, and came out of the gate red-hot, scoring six points in the first 4:39. He finished the night with 11 points on 5-for-6 shooting with five rebounds.

Michigan entered the day regarded as a No. 1 seed by most pundits and controlled its own destiny in the Big Ten title race. After the loss at Penn State, Michigan finds itself fighting for a Big Ten Tournament bye. The Wolverines are now tied in fourth with Ohio State at 10-5 in the conference and still have marquee home games against Michigan State (Sunday) and Indiana as well as another road trip to Purdue.