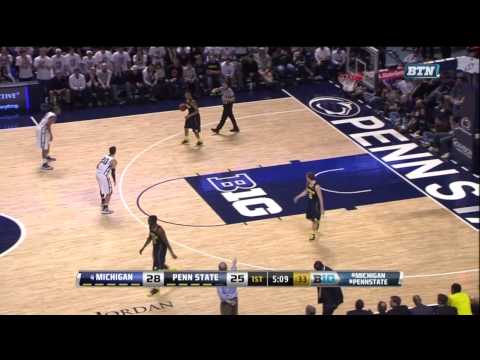 I would recommend taking a couple deep breaths before we revisit this game. There were plenty of reasons Michigan lost to Penn State, but one of the most relevant was Michigan’s inability to hold onto the ball. These two plays occurred in the first half, but were a sign of things to come for the Wolverines. Penn State brought full-court zone pressure and forced two ugly Michigan turnovers that were immediately converted into points. There seemed to be general confusion on the part of the Wolverines on the first play, as Tim Hardaway Jr. attempted a pass to Glenn Robinson III, who had no idea where the ball was. On the second play, Spike Albrecht simply makes a bad decision, thinking he could get his pass to Hardaway up over Jermaine Marshall. Marshall gets a hand on it and throws ahead to Nick Colella, who lays it in. These two plays cut a five-point Michigan lead to one with a little over five minutes to play in the first half. The turnover woes would continue for Michigan, who ended up turning the ball over on 22 percent of its possessions — the only game when the Wolverines turned it over more was against Michigan State in East Lansing.

2) 3-pointer by Nik Stauskas, steal and layup by Mitch McGary give Michigan the lead heading into halftime

These two plays at the end of the first half would be even more key if Michigan had ended up pulling this one out. With two minutes to go, Penn State was poised to go into halftime with a two-point lead on Michigan — something that was unthinkable before Penn State ended up actually beating Michigan an hour or so later. The Wolverines weren’t playing well, and needed a boost going into the break. That boost came in the form of a big 3-pointer by Nik Stauskas and a nice defensive play by Mitch McGary that resulted in a coast-to-coast lay-in. On the first play in the sequence, we see exactly how much attention Trey Burke commands and how much it opens up for his teammates. Burke gets a screen from McGary and drives the lane — and the Nittany Lions completely collapse on him. He draws the attention of literally all five of Penn State’s players, leaves his feet without having any idea of where to go with the ball, and somehow finds Stauskas all alone at the top of key. About a minute and a half later, just before the break, McGary makes a play that is starting to look familiar to Michigan fans: establishing excellent position on Sasa Borovnjak, the freshman pokes DJ Newbill’s pass away and takes the ball to the other end, finishing at the rim. Michigan ended up going into halftime clinging to a three-point lead. Not that it mattered.

They were the best of times, before the worst of times. The outcome of this game would have been surprising enough had it been a constant back-and-forth in which Michigan simply wasn’t able to shake Penn State. However, there was a point in this game when it appeared the Wolverines had it nearly sewn up. About halfway through the second half, Michigan went up 15 points and seemed to be pulling away. It started with a 3-pointer by Tim Hardaway Jr. after Penn State failed to cover him in their secondary transition defense. Then, we see Trey Burke make one of those shots that only seems like it’s a good decision because Burke is the one shooting it: a step-back mid-range jumper with DJ Newbill’s hand in his face. After this, Michigan goes inside to Jordan Morgan for the dunk and Jon Horford off an inbound play. During the first 10 minutes of the second half, Michigan seemed to be humming along just fine — on offense, at least. The Wolverines were out-pacing Penn State on that end of the court, but were never able to shut down the Nittany Lion offense. Uncharacteristically, this run by Michigan was not a result of forcing turnovers or missed shots; they simply executed on the offensive end slightly better than Penn State did for this stretch.

This stretch ended up being Michigan’s undoing. The Wolverines simply couldn’t figure out how to guard Penn State’s ball-screen offense, and the Nittany Lions could not miss. Penn State normally shoots an abysmal 29 percent from the 3-point line; on Wednesday, it made 50 percent of its long-range attempts. Certainly this had something to do with Michigan’s lack of perimeter defense — Penn State shouldn’t have gotten those shots in the first place. Dylan articulated Michigan’s defensive failings nicely in the recap: Michigan trapped when its big man (or whoever’s man was doing the screening) hedged, and Penn State just wasn’t rattled. The Nittany Lions were incredibly patient and poised with the ball, and once they passed out of the trap, Michigan’s help defense wasn’t there. The first play in this sequence is an excellent example of Penn State’s patience. Newbill makes a risky pass after being trapped on the right baseline, and two passes along the perimeter later, Jermaine Marshall — who was 6-of-10 (!) from long range — gets an open look at the top of the key. It’s worth noting that the one time Michigan elected to go under the screen, DJ Newbill stepped into a 3-pointer and hit. I’m not sure if there’s a right answer to how Michigan should be guarding the ball screen, but it seems like execution, especially in help defense, is what’s lacking. By the end of the aerial assault, the game was tied and Michigan was in a fight it never expected.

You could make the argument that this shot was the one that sealed the game. With Penn State up one and just 1:17 left to play, Michigan was still in this game. Michigan actually played pretty great defense on this possession: Trey Burke was matched up with DJ Newbill, but switched on the handoff from Newbill to Jermaine Marshall. Burke stayed in front, but Marshall, looking a lot like Burke himself, lost his defender with a spin move in the paint. Glenn Robinson III helps, but Marshall makes an incredible layup off the spin and all of a sudden Michigan is down two with a minute left. Michigan’s ensuing offensive possession was reminiscent of the Wolverines’ game against Wisconsin in Madison — in both instances, Michigan freshmen failed to convert layups in crucial situations. This time, it was Robinson who got the excellent look for a reverse layup but wasn’t able to put it in. After that miss, Michigan went for the steal for a good 20 seconds before fouling, and from that point Penn State put the game away at the free throw line. The Wolverines failed to score in the last minute and a half of the game. Michigan was simply unable to muster any urgency after going up 15 on Penn State in the second half, especially on the defensive end, and they got burned for it.