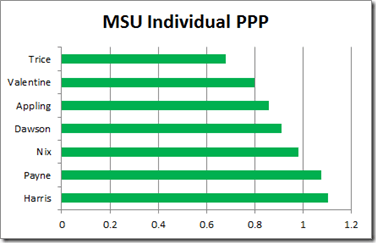 Early in the season as Michigan cruised along to a 20-1 start it was difficult to tone down the optimism in every game preview. Michigan’s statistical profile was so overwhelmingly impressive, especially on the offensive side, that the Wolverines looked nearly flawless. An above average, but far from elite, defense was a concern but a minor one as Michigan simply outgunned and outshot everyone in its sights.

On January 31st, Michigan was ranked No. 1 in the country and had lost just one game. After a long February the Wolverines have been humbled.  Michigan lost four of seven games over the last month and the losses have gotten progressively worse. If Michigan’s loss at Indiana was understandable the overtime defeat in Madison was heartbreaking. The loss in East Lansing was nothing short of demoralizing while Wednesday’s loss at Penn State was shockingly embarrassing.

The exercise of toning down optimism left the picture weeks ago. The last 10 minutes of basketball that Michigan played were so lifeless that it’s tough to envision Wolverine victories – especially against a team that trounced Michigan on its home floor less than three weeks ago.

It goes without saying that Michigan hasn’t exactly inspired since its loss in East Lansing. The Wolverines beat Penn State by eight points, in a game they never led by double digits, handled Illinois at home with relative ease, and then traveled to State College for one of the biggest upset losses of the season. Beyond the obvious home-away difference, it’s tough for any rational person to point to a reason that Michigan should win this game other than somehow managing to flip the switch and play a lot better basketball than it has since January ended.

Yes, Michigan State played arguably its best basketball of the season and Michigan was at its worst. However, the Wolverines look no closer to regaining form than they did a couple weeks back in East Lansing. Dramatic turnarounds happen in college basketball all the time but are they likely to happen against a Michigan State team that enters the game on a week’s rest following a two game losing streak? Not usually.

Michigan State lost to Indiana and at Ohio State since the Michigan game but the Spartans haven’t changed much. Michigan State has the third best Big Ten offense and the fifth best defense. Indiana is the only team that ranks higher on both ends of the floor.

In Big Ten play, the Spartan offense is powered by solid shooting inside (49%) and outside (38%) combined with frequent trips to the charity stripe – 39 FTAs per 100 FGAs. Despite Michigan State’s uncharacteristically low offensive rebounding numbers (6th B1G), the Spartans still dominated the Wolverines on the glass in the first match-up. The Spartans are selective but accurate with their three point shooting while turnovers are an issue that have plagued Tom Izzo’s team this year just as in the past.

Defensively, Michigan State is a great rebounding team (2nd B1G) and grabs over 72 percent of its opponents’ misses off the board. The Spartans also force more turnovers than the traditional Tom Izzo coached team. This was a problem for Michigan in East Lansing as the Wolverines gave the ball away once every four possessions. Michigan is the best two point shooting team in the Big Ten – 53% in league games – and Michigan State is the fourth worst two point defense – 48% allowed in league games – but that match-up didn’t work out for the Wolverines the first time around. Michigan made just 15-of-34 two point attempts (44%) and attempted just six free throws in that ugly loss.

Gary Harris, Derrick Nix, Adreian Payne and Denzel Valentine are the Spartans that continue to see their stock rise while Keith Appling and Branden Dawson are headed in the opposite direction.

Nix is averaging 13 points per game over his last five games after failing to reach double digits in the five games before that stretch. He set the tone in the East Lansing blowout and he’s no longer a one trick pony. Nix has developed exponentially as a passer and he’s developed from a 27% free throw shooter as a freshman to a 79% free throw shooter in Big Ten play as a senior.

Harris is a trendy lottery pick on most mock drafts, I recently ran Chad Ford’s lottery simulator and ended up with Harris being picked by the Detroit Pistons at No. 9. Harris has connected on 50% of his Big Ten three point attempts (2nd B1G) and seems like a shoe in for Big Ten Freshman of the Year. Like Nix, Michigan had no answer for Harris in the first meeting as he continuously got open using screens and knocked down five triples.

Appling has scored a combined nine points and dished out three assists to seven turnovers in his last two outings despite playing 70 minutes. KJ touched on Appling’s struggles over at The Only Colors but his downward trend mimics his regression a season ago.

Dawson is a great athlete and rebounder but he’s failed to reach double figures in seven Big Ten games this season. Dawson is scoring less than a half point per possession on spot up and isolation possessions and over a point per possession on cuts, transition opportunities and put backs. His production is similar to Glenn Robinson III in many ways as he needs to find opportunistic chances to bolster his production.

Valentine has been able to slowly reduce his turnover numbers while boosting his rebounding production – both offensively and defensively – in recent games. Those improvements with his always impressive court vision, size and steadily improving shooting have made him into a versatile sixth man for Tom Izzo.

Michigan’s game plan simply has to revolve around taking shot opportunities away from Harris, Payne and Nix. Make Keith Appling and Brandon Dawson beat you. Given Michigan’s problems with help situations in recent weeks the notion of doubling Nix – I think this has to be done on the dribble, not the catch – is terrifying but likely necessary. Whoever guards Gary Harris needs to not only be able to fight through screens off of the ball but also remember never to help off of him, the Wolverines struggled with both aspects in the first meeting.

Michigan, when measured by its season resume, is a four point home favorite according to Ken Pomeroy. The Wolverines have lost just one game at home over the last two seasons, have their backs to the wall and badly need a victory but it’s tough to muster optimism before these two teams face off again. A win could catalyze a Michigan turnaround but a loss could also send the Wolverines even closer to a downward spiral.