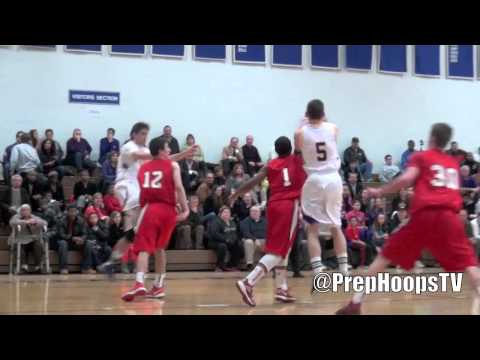 Class of 2014 Michigan recruiting target AJ Turner scored 10 points in De Le Salle’s 55-52 win over Cass Tech in the Operation Friendship consolation game. UM Hoops caught up with Turner for an interview after the game to discuss his season and recruitment.

Talk about your overall thoughts on your performance tonight?

“I think I played pretty good. I didn’t force it. They pressured up on me, and I just got in the lane and got my teammates involved. It was just a good team win.”

How has your game progressed this season? What’s the biggest thing you’ve gotten better at, and what do you still need to work on?

“I think I got better at handling the pressure, because these teams are sending two and three defenders at me, and I’ve been learning how to play through a lot of pain and through adversity. I think I still need to improve on ball-handling, with both hands, and just techniques. Just working on locking my elbow in my jump shot and just perfecting my game”

How comfortable are you as a point guard right now?

“I’m getting better, and getting more comfortable. At the beginning, I was a little worried because I hadn’t played the position before, but now I’m very comfortable.”

Can you talk about your overall thoughts of your Michigan visit? What were your favorite parts?

“It was really good. I got there, me and my family, we watched the game against Northwestern. It was a good game. I really liked the atmosphere, and the environment was really good. After the game, they took me back in the locker room, and gave me the tour. The new facility, I really like it. It was very impressive.”

What’d you think of the student section, the fans and the overall atmosphere at Crisler?

“It was sweet. It was nothing I’ve ever seen before. The team they were playing was just Northwestern. I can’t imagine what it would be like against a team like Indiana or Michigan State.”

Speaking of Michigan State, how did your Michigan visit compare to visits at MSU?

“They were both really good. In the Michigan State visit, 10 minutes before the game, they brought me down and I was talking to (Tom) Izzo, and I was sitting on the bench, me and Cliff Alexander, and they treated me well. Both schools were both really nice. I really like both.”

What have the Michigan coaches been saying about a possible offer?

“I haven’t made any and I don’t have any permanently planned. I’m supposed to be taking one up to Iowa State soon, and I’m supposed to be going up to Xavier soon. The head coach of Xavier was at my practice yesterday and we’re trying to get that set up now. But with the season, I don’t think I’ll be taking any visits until after this season in the spring.”

What are the top schools on your list right now?

“I don’t have any top schools. They’re all pretty good. It’s just a blessing and an opportunity. There are a lot of them on me, and I just have to weigh my options and talk to my family about it.”

Describe how the recruiting process has been for you as a whole. Do you enjoy it all or has it become kind of a chore?

“A little bit of both. Sometimes there are a lot of coaches that are calling me and I try to get my rest and I tell some of them I have to get some sleep. But on the other hand, it’s very exciting. Not a lot of kids get the opportunity to say that there’s 10 coaches calling their phone every day and it’s really a blessing. I love it.”

How much have you been following Michigan this year and what do you think of their season?

“I think in the beginning of the season, they were really good. I watched the game last night against Penn State, and I was really shocked about the loss, but I think they’re going to bounce back and they’re going to play really hard.”

Based on the way they’ve played this season, how do you see yourself possibly fitting into John Beilein’s team?

How have you dealt with adversity this year with a few tough losses and how has it made you better?

“With those losses–we lost to U of D three times–and it was just tough games, all of them. After the game, we just practiced hard and got at it, and we prepared better. It just helped us be a better and stronger team.”

What are your goals for the rest of the season?

“I want to lead my team at least to the Breslin, and make a run in the playoffs and just finish strong this season.”