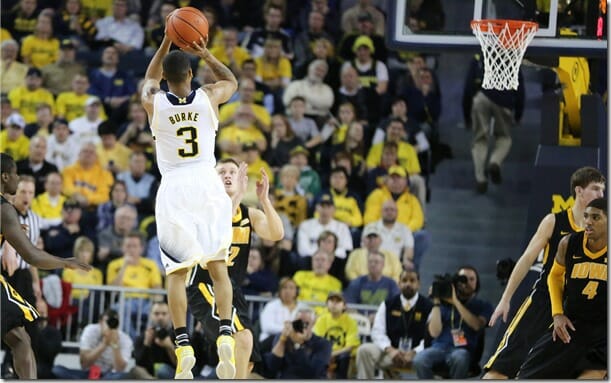 At one point during Michigan’s shocking loss to Penn State in Happy Valley, fans watched a visibly frustrated John Beilein get in Nik Stauskas’s face after the freshman presumably missed a defensive assignment. It was a side of Michigan’s coach fans are unfamiliar with — Beilein is more often seen putting his arm around a player and explaining than slamming his foot down and yelling, more the teacher than the disciplinarian.

Outbursts like that one will continue to be rare — the coach was back to his old self on Friday when talking about Michigan’s loss to Penn State, stressing that the coaching staff will be focusing on positive reinforcement leading into the Wolverines’ match-up on Sunday against Michigan State.

“What they need right now is positive reinforcement,” Beilein said Friday during a press conference. “We’re going to practice today, we’re going to watch very little of Penn State film and move on. That’s the best way, we feel, to approach this right now.”

If the coaching staff is looking for positive reinforcement, the decision to avoid the Penn State film is a sound one. However, they need only avoid the last 10 minutes or so, when Michigan’s offense fell apart along with its already-crumbling defense. There were some positives to take away from how the Wolverines played on offense against the Nittany Lions, before the game turned into a nightmare.

But more than taking positives away from Wednesday’s debacle, the Michigan coaching staff is working to make sure its players keep their perspective.

“We have to remember we are 10-5 in the league and we’re 23-5. We have to remember that,” Beilein said. “We’ve been through a tough stretch here that teams go through. February was not a kind month to us in many ways, and we have to continue to perform.”

It’s no secret: Michigan State’s offense runs through the post. The Spartans have two skilled, experienced post players in Derrick Nix and Adreian Payne and they aren’t afraid to make them the focal points of what they run.

According to John Beilein, this is one thing that makes the challenge of playing Michigan State unique.

“The one thing that they do that virtually no one does in the league is throw it inside over and over and over again,” Beilein said. “Around the country there’s very little post play going on, and they do a great job of that. So that’s different, and we have to prepare for that.”

As any Michigan fan can tell you, defending the post is not something the Wolverines did well against the Spartans when the two teams first met on February 12th. Seven of Michigan State’s first 10 baskets of that contest came in the paint and the Wolverines seemed utterly unable to affect Derrick Nix when the big man got the ball inside.

But it’s not just post defense that Michigan has to shore up. Michigan State completely disabled Michigan’s offense, forcing the Wolverines to turn the ball over on nearly 25 percent of its possessions and holding Tim Hardaway Jr., one of the most dynamic Wolverines on the roster, to just two points on 1-of-11 shooting.

Before Jordan Morgan went down with an ankle injury in the opening minutes of Michigan’s first match-up with Illinois on January 27th, life was good. Sure, the Wolverines had dropped one on the road against Ohio State but other than that, they were undefeated and feeling strong heading into the meat of their Big Ten season.

More than that, John Beilein really liked what he had seen when he subbed Morgan in at the four spot to spell Glenn Robinson III and put Jon Horford or Mitch McGary at the five. The team got the benefit of Morgan’s rebounding and defensive know-how, along with the shot-blocking ability and athleticism provided by both of the other big men.

“I thought we had a great rhythm when we were doing that (using Morgan at the four),” Beilein said. “That’s the one we preferred before he was injured (playing Jordan at the 4). We were playing really well at that time before the injury. But when you’re out chasing somebody on the perimeter, it’s a little more taxing on your mobility.”

Given Michigan State’s post prowess and Morgan’s nearly-complete recovery from the ankle injury, Michigan fans can bet on seeing at least a glimpse of that two-post look against the Spartans on Sunday.