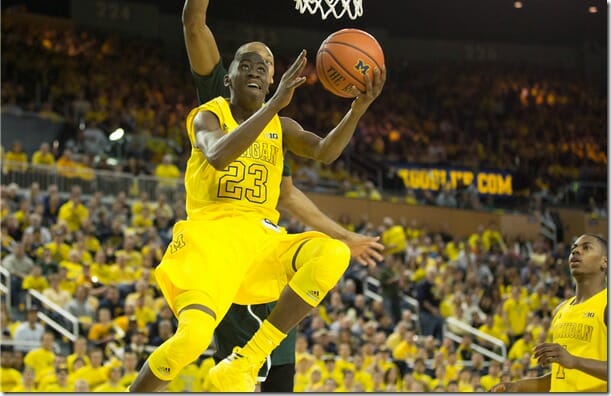 Michigan has won a lot of games this season but the wins have rarely come ugly. The beautiful offense and lopsided score lines look great to pad a resume but the ugly wins are always the most rewarding. John Beilein agreed.

“We’ve had some real pretty wins here, where we did everything right and the ball went in and we just played lights-out,” Beilein explained after the win. “Today, it was all about grit.”

There were times that it felt like nothing could go Michigan’s way. The Wolverines fumbled loose balls away time and again; botched layups that turned to quick Michigan State threes; allowed Michigan State to rebound half of its missed shots; and failed to make a three point shot for the entire game. Despite what at times felt like the a comedy of errors and bad breaks, the Wolverines continued to play hard.

Resilience paid off as Michigan finally took the lead early in the second half and extended it to 10 points with just 4:37 to play. But even then nothing would come easy. Michigan State roared back to tie the game with under a minute to play and had multiple opportunities to win the game in down the stretch. Michigan had something that Michigan State didn’t: Trey Burke. Burke recorded steals on two of Michigan State’s final three possessions, both of which provided the opportunity to take the lead – or the win.

Michigan’s offensive performance was similar to its game against West Virginia in Brooklyn – heavy on the dribble drive. Michigan State was able to take away so many facets of the Wolverine offense that in the half court, Michigan attempted to get its playmakers in space with the opportunities to drive. Both Caris LeVert and Tim Hardaway Jr. attacked the basket more than usual while Trey Burke was his typical self, weaving through screens and contact into the paint before scoring with an array of layups or midrange jumpshots.

Michigan didn’t hit a three point shot, an obvious red flag, but didn’t fall in love with it either – attempting just 20% of its field goals from long range – was able to create easy offense in transition. The Wolverines scored 18 points off of turnovers and had six fast break points. While Michigan was unable to secure many clean rebounds – a usual boost to transition performance – it did steal the ball 11 times. The Wolverines were able to exploit those unsettled situations for easy twos and converted 53% of its looks inside the arc. According to shot chart data from Michigan’s athletic department, Michigan made just three shots outside of the paint all game.

More than anything, this win was about Michigan’s defense. The Wolverines held the Spartans to just .90 points per possession, their best defensive performance since January 30th against Northwestern. Michigan defended the interior (41% 2-point shooting allowed), forced turnovers (28% forced turnover rate), and avoided costly fouls (12 FTA to 59 FGA). That being said, there was still plenty of room for improvement. Michigan State dominated the offensive glass, grabbing half of its missed shots and scoring 16 second chance points. The game turned early in the second half due to Michigan’s ability to draw charges. The Wolverines took four charges before the first media timeout of the second half and held the Spartans scoreless to seize control of the game. The largest difference between the first and second halves was Michigan State’s three point shooting – 5-of-11 in the first, 1-of-11 in the second. The Spartans uncharacteristically fell in love with the long range shot, attempting 40 percent of their field goal attempts from outside.

It was a bit childish but for the first time in weeks, Michigan showed some swagger midway through the second half. The Wolverines slapped the floor, mimicking the Spartans midway through the second half was when Michigan finally appeared to regain some of its swagger. The Wolverines finally looked like a team that was not only confident, but having fun back in front of its home crowd in a big game.

Michigan is going to have to build on its momentum from this win quickly as it now sits tied for second in the Big Ten with Michigan State, Wisconsin and Ohio State. One of those four teams is going to end up playing on Thursday in the Big Ten Tournament. Michigan has to travel to Purdue, which won at Wisconsin earlier Sunday afternoon, before hosting Indiana in the season finale on Sunday.