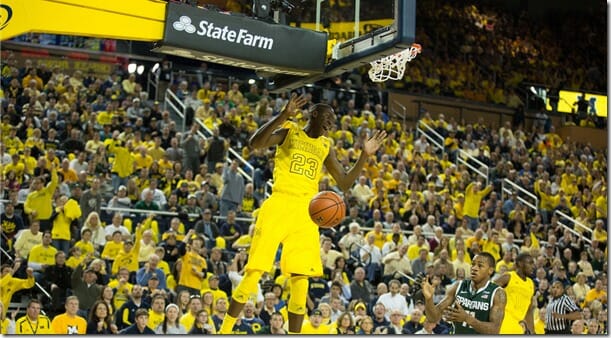 Michigan limped into Sunday’s Michigan State rematch on life support. The Wolverines had been through the rigors of a treacherous Big Ten stretch and the after effects dragged them into an upset loss at Penn State. With Michigan State, which led by 31 points with 1:27 to play in the first meeting, coming to town there was little confidence among Wolverine faithful.

For much of the first half, Michigan looked like the same team that we’ve seen throughout the last troubling stretch but it managed to stay within striking distance of the Spartans. A strong finish to the first half led to a better start of the second half. It was defense that rejuvenated the Wolverines. Michigan held Michigan State scoreless for the first four and a half minutes of play and turned a three point half time deficit into a seven point lead.

The Wolverines wouldn’t trail after taking the lead on a Jordan Morgan layup with 17:17 to play despite the Spartans tying the game with :54 seconds to play. With the game tied and Michigan State in line to take the final shot, Trey Burke pick pocketed Keith Appling for an easy dunk on the other end.

Trey Burke led the way for the Wolverines with 21 points and eight assists. Mitch McGary scored 11 points and grabbed four rebounds off of the bench while Caris LeVert played a strong 30 minutes in relief of Nik Stauskas, who left the game early after being elbowed in the face and requiring 12 stitches.