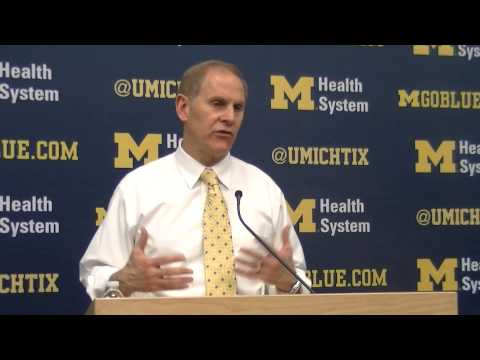 John Beilein was available during his post-game press conference to talk about his team’s 58-57 win over Michigan State. He mentioned that he had not received any news about Nik Stauskas regarding a potential concussion resulting from the elbow Stauskas took in the first half. You can watch the full presser below or read selected notes and quotes after the jump.


Opening statement: “We’ve had some real pretty wins here, where we did everything right and the ball went in and we just played lights-out. Today, it was all about grit. Michigan State really does a great job defensively and we were going to have to score the ball in different ways and stop them in different ways. Obviously you hate the offensive rebounds we continue to give up, and (Adreian) Payne’s a tough guy to keep off there. He just gets in spots where the space to box him out is so small, you can’t really get anything done. But, the big difference was the 18 turnovers they got to our seven. So, whatever offensive rebounds they got, the possessions that resulted from that, might have equalized to get the win. You can tell our team is really excited about it, we knew we just had to get a win, especially after the Wednesday night disappointment. Now hopefully this will help us in our next game against a Purdue team that just beat Wisconsin at Wisconsin.