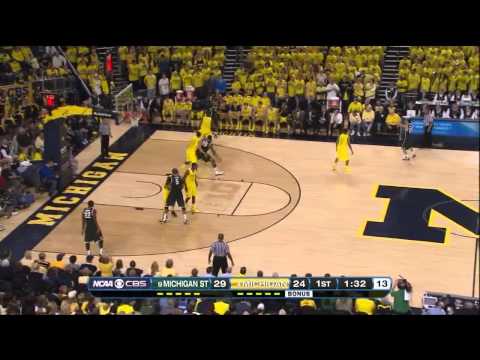 During Michigan’s first match-up with Michigan State in East Lansing, Derrick Nix was dominant. On Sunday at the Crisler Center, it was a completely different story. Michigan forced Nix into five turnovers in the first half and 0-for-4 shooting, setting the tone for a resounding defensive effort in the post early. The major, and most obvious, reason for Michigan’s vastly improved defense on Derrick Nix is the return of Jordan Morgan. John Beilein mentioned during the post-game press conference that Morgan and Nix have been going at it in the post since high school — Morgan at U of D Jesuit and Nix at Pershing. Morgan’s intimate knowledge of Nix’s game, as well as his superior footwork, positioning and strength, forced Nix into some awkward spots. In each one of Nix’s turnovers shown in the above clip, Morgan is defending. The first few plays are deflections, but jump to the 15-second mark to see some of Morgan’s handiwork in the post. Take a look at where Morgan positions himself against Nix on this play — he’s immediately forcing Nix to the right, his significantly weaker hand. Nix still insists on going left and attempts to use his shoulder to move Morgan, but Morgan holds fast and Nix is forced into a travel. On the following play, Morgan positions himself the same way, forcing Nix right. Nix still forces the ball left and in doing so moves further away from the basket, forcing a tough hook shot over his right shoulder, which he misses. After Michigan State corrals the offensive board, Nix finally goes right and tries an up-and-under, but Morgan wisely doesn’t fall for the pump fake and forces the turnover. Morgan’s one-on-one defense on Nix in this game was masterful.

With a little over a minute left in the first half, Derrick Nix made two free throws to put Michigan State up by seven points. It was the largest Michigan State lead of the game, and Michigan risked going into the locker room demoralized. But in that last minute, the Wolverines made a few plays that completely changed the feel of the first half and gave them momentum heading into the second frame. First, Trey Burke slashes to the hoop and makes a layup, cutting the lead to five. Then, Michigan State has another chance to score with very little time left for Michigan to respond. John Beilein elects to go with the 1-3-1 zone defense out of a timeout and it completely stymies the Spartans. Instead of throwing the ball into the paint as they are wont to do, Michigan State’s guards pass the ball along the perimeter for most of the possession, looking confused by the new defense. Finally, Travis Trice takes it himself and winds up with a poor look at the basket, a mid-range jumper falling away. After collecting the rebound off the airball, Michigan pushes the action up court. Tim Hardaway Jr. passes the ball to Trey Burke, who passes it ahead to Caris LeVert. LeVert finishes with a pretty reverse layup and Michigan only trails by three when seconds earlier it appears it could trail by seven.

The first three minutes of the second half were a veritable nightmare for Tom Izzo. He watched as his team’s offense floundered, all because his best players couldn’t stop picking up offensive fouls. It started when Gary Harris drove the lane after a nice pump fake early on in the second frame. Jordan Morgan did what he does so well — the redshirt junior slid away from Derrick Nix and directly into Harris’s path, drawing the charge. At the 37-second mark, we see an offensive foul call that was slightly less cut-and-dry. Adreian Payne receives the ball in the post and is guarded by Glenn Robinson III. Payne bodies up the young freshman, and gives him three or four hard nudges before Robinson finally sells one of them and draws the foul. It was a bit of a flop, but Payne made it easy for the ref to call it; lowering your shoulder into a defender isn’t a post move — it’s a foul. Robinson made the smart play, and those rooting for Michigan and Michigan State will differ on whether or not it was the right call by the referee. The next charge call is drawn by Caris LeVert, who makes an excellent play by leaving his man and getting himself in front of Nix after Mitch McGary goes for the steal. Nix bowls over the freshman and is called for the charge. During his stretch, Harris picked up his second and third fouls, Payne his second, and Nix his second.

It’s impossible to overstate the significance of the contributions from Mitch McGary and Caris LeVert in Michigan’s win on Sunday. Both freshmen played as well as they have in a month and were especially key in deciding the game in the second half. The increased versatility of McGary’s offensive game continues to be striking; the Chesterton native showed off a wide array of moves. After Trey Burke draws the attention of Derrick Nix — McGary’s defender — on the fast break, McGary streaks down the lane, receives the pass from Burke, and gets a dunk; later, McGary gets a tip-in over Adreian Payne to extend Michigan’s lead to five points; before it’s all said and done, McGary has taken Nix baseline for a reverse layup and hit a fadeaway jumper over him. As for LeVert, the freshman was clearly focused on going at Gary Harris, his primary defender, after Harris had picked up his third foul. It was essential to Michigan’s offense for LeVert to be aggressive and not timid, and LeVert filled that role beautifully on Sunday. While LeVert missed his fair share of shots, he kept Harris on his toes and ended up making some nice buckets, including the baby hook in the lane in the above clip. Like all freshmen, McGary and LeVert have experienced their ups and downs this season — against the Spartans, each showed exactly what he’s capable of.

This run by Michigan showcases just how dangerous Trey Burke is. The point guard had a terrific night, though his numbers are in danger of looking average because of their frequency: 21 points, eight assists, five rebounds, two turnovers. Burke was responsible for eight of the 10 points Michigan scored during this run, and it’s easy to see that part of what makes him so dangerous is the attention he commands from the whole defense. Burke kicks things off with an excellent reverse layup after Glenn Robinson III frees him up with a strong pick on Keith Appling. The next time down the court, all five Spartans are looking at Burke as he gets to the top of the key. Gary Harris is one of them, and the freshman completely loses his assignment, Caris LeVert. LeVert cuts baseline underneath Harris and Burke finds him for a layup. That play happens because of the respect Burke commands. About a minute later, with Michigan State players slapping the court on defense, Burke shows off an area of his game that is utterly unmatched by any other player: ball control under duress, especially in the paint. Burke works his way into the lane through a series of hesitations and ball screens, and finally makes his way past Appling to the rim for the layup. Burke missed some shots on Sunday, but otherwise was his usual transcendent self on offense.

Did I mention that Trey Burke finished the game with five steals? Victor Oladipo isn’t the only player of the year candidate who can win games with his defense. While Burke turned in a stellar offensive performance, it was perhaps his defense that stole the show. Burke shut down a struggling Keith Appling, forcing the junior to take several tough shots, forcing nine points on nine field goal attempts. But the apex of his night occurred with 25 second left in the game, with maybe the most “clutch” play of the sophomore’s career. With Michigan State having tied the game and with an opportunity for the Spartans to hold for the last shot for the win, Appling dribbled the ball upcourt, presumably to call a timeout. At this point, Michigan was looking at overtime as the best-case scenario. In the span of about three seconds, that all changed. As Appling switched hands, Burke slipped behind him and impeccably poked the ball away, finishing with a dunk on the other end. The basket put Michigan back in the driver’s seat, up by two. Then on the final play, Michigan State called a play for Gary Harris, where the freshman had the option to take the shot himself or pass to Appling for the last shot. Harris kept the ball too long, and Burke stole the pass to Appling, sealing the game for Michigan.