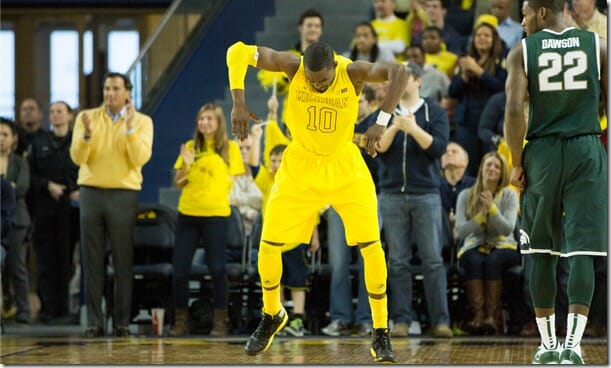 It’s been a roller-coaster ride for Michigan since our last bracketology update. The Wolverines traveled to Penn State on Wednesday for what was supposed to be a relatively easy road win, even against a Nittany Lion team that appeared to be improving. Instead, Michigan lost in stunning fashion, giving up a 15-point second half lead. With the loss, hopes of catching Indiana in the Big Ten title race took a significant hit. Michigan came roaring back to life in its big home win against Michigan State the following Sunday, but its chances at a share of the conference crown remain slim. Indiana would have to lose its remaining two games and Michigan would have to win out. The remainder of the conference season is all about seeding for the Big Ten tournament and as of now Michigan, at the fifth spot, would play — guess who — Penn State in the first round.

At this point, Michigan finds itself out of 1-seed contention and more along the lower end of the 2-3 seed range. However, that is far from set in stone: the Wolverines still have a date with No. 2 Indiana in both teams’ last game of the conference season, and then there’s the Big Ten tournament to consider. With all the fluctuation of teams at the top this season, Michigan could easily find itself back in the conversation for a 1 seed with a win over Indiana this Sunday.

After spending much of the season at least in the conversation for a 1 seed, Michigan now finds itself on the outside looking in when it comes to a top spot in the NCAA tournament after an embarrassing loss at Big Ten-worst Penn State. So is it possible for the Wolverines to reclaim a top seed? And if so, what has to happen for them to do it?

First, Michigan has an excellent opportunity in front of them in its last conference game, going up against top-seeded Indiana. If the Wolverines can beat Indiana at home, that will go a long way to proving to the selection committee that they deserve a 1 seed. However, that won’t be enough. Along with what Michigan does, whether or not it can reclaim a 1 seed will depend on what teams at the top do to close out their seasons.

Given the wide-open nature of college basketball this season, it’s reasonable to expect there to be some shuffling at the top before the conference slates are over. The teams jockeying for position at the top seeds right now are Kansas, Louisville, Georgetown, Gonzaga, Duke, Indiana, Florida and Miami. Several of those teams have tough tests to close out the regular season. Duke’s last game is at North Carolina, a throw-out-the-records sort of match-up; Georgetown has a road game against a dangerous Villanova team followed by a home date with Syracuse; Indiana of course closes out its season with a home game against Ohio State and a road match-up with Michigan; even Florida closes out its conference season with a match-up against Kentucky at Rupp Arena. Michigan will need a few of those teams to drop games they’re supposed to win if it wants to dream of recapturing a top seed.

But even a win over Indiana and other top teams losing likely won’t be enough. That’s where the Big Ten tournament comes into play. Michigan will likely need to make a significant run and beat some Big Ten teams of note in order to secure a 1 seed, while a tournament championship would seem to put the Wolverines in a great spot for a top seed. Michigan is likely looking at a seeding in the 2-3 seed range, as things stand today, but the next two weeks could take still see that number go up or down.