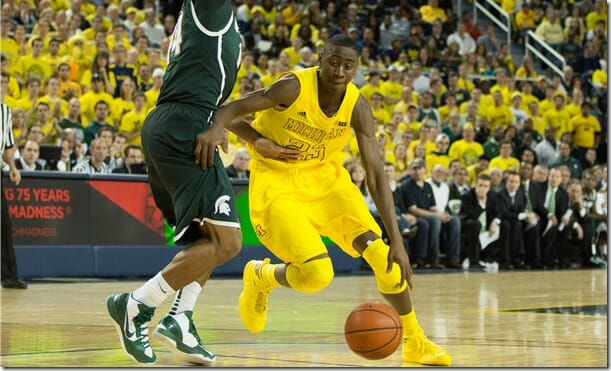 Four minutes into Michigan’s game against Michigan State, Branden Dawson’s elbow made a firm connection with Nik Stauskas’ face. Stauskas went down in the bloody heap and was escorted off the floor with a towel covering his blood soaked face. It was clear that Michigan would be without its best perimeter shooter for the duration of the game.

But while Michigan was down a shooter, in Stauskas’s place stepped a much-improved defender in Caris LeVert. As a defender, Stauskas seems to have regressed as the season has worn on; LeVert, on the other hand, seems to get better on the defensive end with every game.

To illustrate this point: Stauskas was matched up with Gary Harris, and just before Stauskas got hurt, Harris had blown by him for an easy layup. LeVert came in for Stauskas and Harris, with LeVert guarding him, didn’t score again until the 5:50 mark in the first half.

"In that particular game, he really did extremely well for us defensively, given who he was guarding, how he guarded him,"  Beilein said during a press conference on Tuesday. "He did a wonderful job there."

Harris finished the game shooting under 50 percent from the field and just 2-for-7 from beyond the arc. LeVert was in his face all game, playing 30 minutes in place of the injured Stauskas.

There’s no doubt that Stauskas is a valuable asset offensively with his shooting as well as his effectiveness in the screen-and-roll game. However, it’s clear that LeVert is the better defender of the two freshmen, and after Sunday’s performance Beilein said that could mean an increased role for LeVert.

John Beilein has expressed his desire to play with two bigs before, but Jordan Morgan’s ankle injury on the road against Illinois put a definitive hold on any plans for implementing a two-big lineup. There simply weren’t any players who knew both the four and the five positions well enough to run it.

Now that Morgan is back to near full strength, however, Beilein is ready to continue playing him at the four, with Mitch McGary or Jon Horford at the five. McGary and Morgan were both on the floor quite a bit against Michigan State, with excellent defensive results.

Of course, if you’re going to "go big" against any team, it would be Michigan State, with the Spartans’ duo of Derrick Nix and Adreian Payne. Beilein said whether or not he decides to play two bigs at the same time truly depends on the match-up.

Still, the flexibility that Morgan’s return brings to the coaching staff is undoubtedly welcome. Morgan said it opens up an entirely new kind of offense, one predicated more on attacking the rim than perimeter jump-shooting. It was arguably what enabled Michigan to defeat the Spartans despite not hitting a 3-pointer all game.

"I think we’re able to command more of a presence defensively when it comes to cleaning up rebounds. Offensively, just getting people open and I think it allows us to attack the paint a little more," Morgan said. "We have two big screeners out there, two people going after the offensive glass, I think when we had a big lineup we were able to clean up the offensive rebounds and get some putbacks and things like that, extra possessions."

After the particularly debilitating loss at Penn State on February 27th, the Wolverines decided they needed to hold a players-only meeting on their day off. They went to Pizza House and hashed out a few things.

Among them was the idea that individual players needed to take ownership of their own mistakes and work to correct them now, seeing as how the season is ending in about a month. While Jordan Morgan described the meeting as "laid-back," the focus was on taking action in the present to correct mistakes.

Morgan, however, had a different message, and unarguably one the team has taken to heart is game demeanor is any indication.

"My message for the team during that meeting was a little different. It was more about the passion that we played with. When we started the season, before we were even playing games, we were in practice and we were just passionate about getting better every day.  It was fun for us to come and get better. I just felt like after losing some tough games – close games, games that weren’t close – I didn’t feel that same passion from this team. The passion to win, to have fun, to get better. It was starting to get like, ‘we’re back at the gym again’ instead of ‘we’re back doing what we love to do again.’ I just encouraged everybody to think back to what it was like when we started the season, when we started practice. That feeling that we had coming into practice just playing with each other. That’s what I had to say."

Injury notes: Nik Stauskas has been cleared to play against Purdue. He also had just four stitches put in, not the widely-reported 12. Beilein: "I loved the way he bounced back and showed toughness." … Jordan Morgan says his ankle is "above 90 percent," but Beilein doubts he’ll get back to full strength for the remainder of the season.