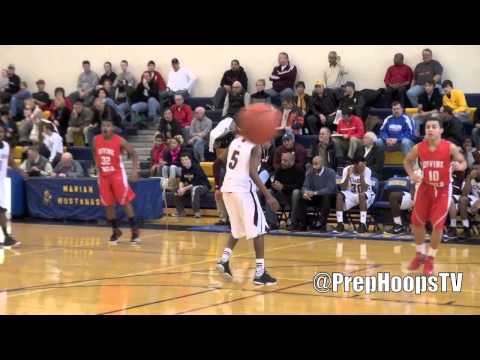 University of Detroit Jesuit point guard Cassius Winston is one of the most promising in-state prospects in the class of 2016. Winston has drawn rave reviews from many throughout his first year of high school basketball, and UM Hoops was in attendance to watch him against Pershing. Winston finished with 13 points, six rebounds, four assists and three steals in U of D’s 74-59 loss. We caught up with Winston’s coach, Pat Donnelly, to discuss the point guard and his recruitment.

First of all, can you talk about Winston’s performance tonight?

“Well he didn’t play his best. He was a little sloppy with the basketball. He was uncharacteristic the way he handled the ball tonight. But he’s a freshman, and we’ve expected a lot out of him this year. I think he’ll bounce back pretty quickly, and he’s a very, very good player. He just didn’t have one of his better games.”

What do you like about Winston’s game? What are his biggest strengths and weaknesses?

What positives can he take, especially as such a young player, from a loss like this?

“He’ll realize the competition level, and the level of athleticism to play against a team like that. He certainly sees similar things in the AAU circuit, but this will be a good learning experience for him.”

How has his game developed since starting high school basketball?

“I think his game has been very good, but what he’s done is he’s really made our team better. He sees the court and makes other people around him better. And that’s been evidenced by our post play. Our post players have done a tremendous job this year, and a lot of that is attributed to Cassius finding them in a place that they can be successful”

What schools that have been recruiting him and which schools are showing the most interest?

“He’s got offers from Colorado, UMass and Iowa State. Michigan has been here a number of times, Michigan State, Ohio State, Missouri, Iowa, so a number of the Big Ten’s. We’ve heard from Baylor, and really a lot of different schools, Georgetown. He’s going to continue to get better.”

What coaches from Michigan have been coming to see him, and what are they telling you that they like about his game?

“We’ve seen Bacari Alexander a few times at games, and I talk to him on a fairly regular basis. The latest text I got from Bacari was “we love Cassius.” I think he’ll probably be at the Michigan, Michigan State game [last] Sunday.”

Can you talk about him as a person? What kind of character he has?

“Outstanding character. You can’t get a better kid. (He’s) humble, outstanding person, 3.9 student in honors classes at U of D Jesuit which is phenomenal. You can’t find a better kid. He’s going to have his pick of schools, and that’s a big reason. Along with his talent, he’s a tremendous individual and an unbelievable student.”

What’s the No. 1 thing you want to see him get improve on?

How much potential does he have as he continues to develop?