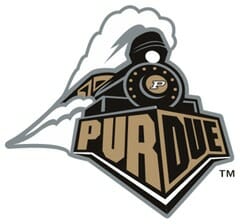 Michigan’s Big Ten title hopes continue to survive in spite of its best efforts. A week ago, the Wolverines traveled to State College with control of their own destiny. Win out and earn a share of the Big Ten title. Those chances seemed to evaporate as quickly as Michigan’s 15-point second half lead. A loss to the winless Nittany Lions was sure to end Michigan’s hopes of a Big Ten crown. But the Wolverines got up off of the mat and pulled out a win over in-state rivals Michigan State on Sunday. Now with another Indiana loss, Tuesday on senior night against Ohio State team, the Big Ten title is back on the line.

Once again, Michigan controls its own destiny. With two games to play the scenario is simple: beat Purdue, beat Indiana and share the Big Ten title.

However, the road has proven unforgiving for John Beilein’s young team. After starting the season 4-1 in road games, Michigan has lost its last four away contests dating back to February 2nd at Indiana. Three of those four losses came at three of the Big Ten’s toughest venues but the fourth was a dismal late game collapse against one of the league’s worst teams.

Purdue enters tonight’s game after its best win of the season, a 69-56 victory over Wisconsin at the Kohl Center. The Boilermakers outscored Wisconsin 38-20 in the second half en route to the blowout road victory.

Matt Painter’s team has been outscored by league opponents by .08 points per possession and features the Big Ten’s ninth best offense and defense. However, Purdue has managed to grind out a 7-9 conference record to date. With two home games remaining, Purdue has a long, but not impossible, chance of reaching a .500 conference record – a remarkable feat in nation’s best conference for a team that is also fighting for a .500 regular season record.

Purdue’s offense struggles stem from turnovers and shooting. The Boilermakers make just 43 percent of their twos (10th B1G) and 34% of their threes (5th B1G) for a 45% effective field goal percentage (9th B1G). Given that Purdue has the second youngest team in the Big Ten, including freshman point guard Ronnie Johnson, turnover woes should come as no big surprise. Only Minnesota has turned the ball over more often than Purdue in Big Ten games. Despite the shooting and turnover woes, Purdue has thrived on the offensive glass; rebounding 35% of its missed shots in Big Ten play (3rd B1G).

Defensively, Purdue excels defending the interior. The Boilermakers allow Big Ten opponents to shoot just 44% on twos and are the third best shot blocking team in the conference. Overall, Purdue’s 46% effective field goal percentage allowed ranks fourth in the Big Ten and is the strength of Matt Painter’s team. Unlike stereotypical Purdue teams, the Boilermakers force fewer turnovers than any other Big Ten team. Purdue is also just the eighth best defensive rebounding team in the Big Ten, and allowed Michigan to rebound 40 percent of its misses in the first meeting.

Terone Johnson leads Purdue in scoring at 12.6 points per game. Johnson is a power guard that does the majority of his work attacking the basket but isn’t a great finisher (41% on twos) and shoots just 60% on free throws. Johnson has played well against Michigan in his short career, exploding for a monster performance last year in Ann Arbor and scoring a team high 14 points in the previous meeting this season.

Purdue shoots fewer threes than any other Big Ten team, attempting just 22% of its shots from long range. D.J. Byrd has made 41 threes in Big ten games compared to his teammates combined 25 makes. Byrd started the game earlier this year very hot but John Beilein opted to move Hardaway to the assignment and he did a tremendous job of slowing him, holding him scoreless in the second half. Stop Byrd and Purdue’s offense struggles to find firepower. The senior guard is averaging over 3.5 made threes per Big Ten win compared to just 2.2 per loss.

Freshman Ronnie Johnson runs the point guard spot for the Boilers. Johnson is a promising guard, one of the Big Ten’s quickest with the ball in his hands, but he’s woefully inefficient. Johnson shoots just 40% on twos, 15% on threes and 58% from the free throw line. He gets to the free throw line often but his shooting woes and turnover problems have plagued him this season.

A.J. Hammons has seemingly limitless potential as a back to the basket big man but he’s played 21 minutes or fewer in the last four games. Hammons was benched for the Northwestern and Iowa games and that’s not the way to Matt Painter’s heart.

Ken Pomeroy likes Michigan to win in West Lafayette, predicting a 69-63 final score with a 71% chance at the win. Purdue is obviously capable, evident by the win in Madison, but the Wolverines have a second chance. Now it’s time to see if they can finally take advantage.