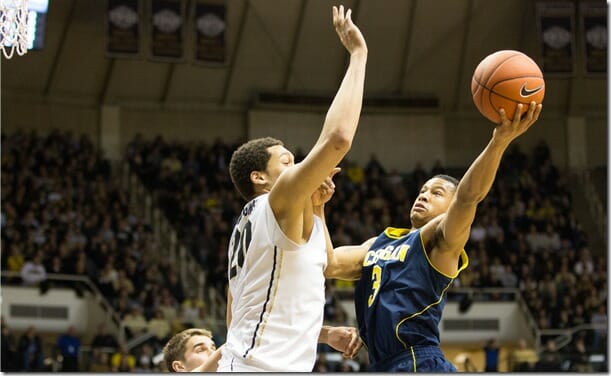 After a strong early start, Michigan looked nothing like a team that deserved to leave West Lafayette with a victory. For the third consecutive game, the Wolverines allowed a double digit lead to evaporate in a matter of minutes. Purdue turned an early 19-7 Michigan lead into a 52-40 deficit over the course of the game’s middle 20 minutes.

Michigan’s performance throughout the first 30 minutes was defined by poor transition defense and half court rotations, missed layups and to put things simply, a lack of intensity. But the Wolverines were able to lean on their player of the year down the stretch. With 11:06 to play, down 12 points, and with a share of the Big Ten Championship on the line, Trey Burke came alive.

Burke scored 21 points and handed out four assists in the final 11 minutes of play as Michigan survived with a 80-75 victory. For the second game in a row, he added the clinching steal for good measure.