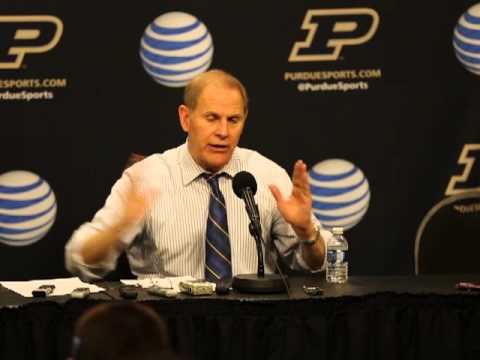 John Beilein met with media during his post-game press conference after Michigan’s 80-75 win over Purdue in West Lafayette. You can watch using the embedded media player below or read selected notes and quotes after the jump.


Opening statement: “I think I said to our press last week that one of the keys to winning on the road is at least get off to a good start. I thought we really played well in the first half. We missed a ton of really easy shots, that is all just part of the game, I guess. Still, being down four, I thought we played a really good first half. Did not expect what we saw in the first five to ten minutes of the second half. Matt (Painter) did a coverage on our ball screen that blew us apart for a little bit. Once we regrouped, we became much better at what we had to do. Really, I applaud my coaching staff and my team for staying united and helping everybody get through that. We had some guys come up big today. Really big.”