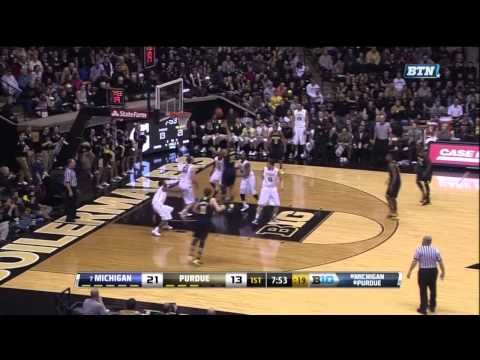 This game was a fight from start to finish, but it felt like, in the first half, it didn’t have to be that way. Michigan got to the basket plenty of times but simply couldn’t convert, missing an astounding number of layups the Wolverines usually have no trouble making. It was a wholesale cold streak, with nearly everyone on the floor guilty. When guys like Jordan Morgan and Glenn Robinson III — players whose essential function on the offensive end is to make layups — are seeing bunnies rim out, Michigan is in trouble. This isn’t the first time Michigan has been plagued by missed layups — they played a key role in the Wolverines’ loss to Wisconsin, as well. It probably isn’t fair to say it’s an issue Michigan needs to worry about, but two plays by Morgan and Jon Horford stood out. At the 20-second mark in the above clip, Horford finds himself all alone in the lane but is relatively unaware of his surroundings. There isn’t really anybody between him and the basket, and Horford makes the shot more difficult than it needs to be by not going straight up and instead opting for a hook. Later, at the 33-second mark, Jordan Morgan receives an excellent pass from Burke in the post but for some reason fades away from the basket as he goes up. Presumably, it was to seal the defender he felt behind him — except that defender was the 6-foot Ronnie Johnson. In both cases, a lack of situational awareness from Michigan’s big men led to shots that were made more difficult than necessary and subsequently missed.

Midway through the first half, Michigan had jumped out to a 12-point lead on the road against Purdue, even while it wasn’t playing its best basketball. Then, after slowly chipping away at the lead for the latter part of the first half, Purdue woke up — thanks largely to Terone Johnson. Johnson was responsible for 12 of the 17 points his team scored from the 6:47 mark through the end of the first half, and it was a sign of things to come for the junior. Michigan’s defense during this stretch left much to be desired. A few of Purdue’s points were on fast breaks and secondary breaks, but look at the first two plays in the above clip. In the first, there is some major confusion between Tim Hardaway Jr. and Nik Stauskas on a screen in the post. It appears Hardaway thought they were switching on the screen and Stauskas did not, which left both of them on the screener, Donnie Hale, leaving the far more dangerous Johnson all alone at the 3-point line. This is exactly the kind of defensive breakdowns that drive John Beilein crazy. On the next play, Hardaway misses a jumper that caroms off the rim and initiates a fast break opportunity for the Boilermakers. Even when the play slows down, the Wolverines look genuinely confused as to where they’re supposed to be, with both Hardaway and Jon Horford guarding the middle of the post. This leaves Rapheal Davis wide open in the corner and he nails the long-range bomb. By the time the dust cleared, Michigan’s lead had evaporated and the Wolverines went into halftime down four points.

3) Trey Burke takes over the second half

With 11:33 left in the game going into a T.V. timeout, Purdue was sitting pretty. The Boilermakers were up 12 on Michigan and appeared perfectly poised to dash Michigan’s Big Ten title hopes for good. Michigan couldn’t get anything going on offense and looked shell-shocked. Then, Trey Burke happened. The sophomore rose from the bench and played like the best player in the country, bailing out his teammates when they needed him most. Michigan scored 21 points from that time through about the four-minute mark — Trey Burke accounted for 17 of them. He needed to pull out nearly every weapon in his arsenal to get Michigan back into the game, on both offense and defense. There was the pull-up 3-pointer to kick things off; then his patented long two from the baseline falling away, a terrible shot for anyone other than Burke. He freezes Terone Johnson on a drive to the cup and makes the left-handed layup. Then Burke shows his mastery of pace as he streaks downcourt following a Spike Albrecht steal, slowing and starting in order to keep Purdue’s Dru Anthrop out of the play and make room for an exceedingly difficult floater at the free throw line. Trey Burke finishes of his run with an Aaron Craft-esque steal of Johnson that leads to him assisting on an Albrecht lay-in. Michigan had no business winning this game, but Burke did what a Player of the Year does; he made sure they did.

4) Tim Hardaway Jr. nails a 3-pointer ice-cold off the bench

Tim Hardaway Jr. has had trouble establishing an offensive rhythm during Michigan’s past few games, even when he’s played his usual minutes. Against Purdue, Hardaway was further stymied by foul trouble, especially in the second half. The junior didn’t have a great shooting night, going 6-of-14 from the field and making three of seven 3-pointers, and he seemed to be searching for some sort of rhythm most of the game. Less than a minute into the second half, Hardaway scored a layup. After that score, the Miami native spent most of his time on the bench after finding himself in foul trouble. At the four-minute mark in second half, Hardaway entered the game after AJ Hammons hit two free throws to put Purdue up by a point. About ten seconds later, Hardaway hit a huge 3-pointer to give Michigan a lead the Wolverines wouldn’t surrender for the remainder of the game. Michigan did some nifty ball-reversal action to get Hardaway an open look, and Nik Stauskas’s ability to consistently penetrate into the teeth of the Boilermaker defense ended up being critical to the success of the play. As Stauskas curls around the screen from Jordan Morgan after receiving the handoff from Trey Burke, Hardaway slides down to the free-throw line extended. Undoubtedly because of the success Stauskas had taking the ball to the hoop all game long, Terone Johnson helps off of Hardaway to attempt a strip. Stauskas finds Hardaway, and Johnson doesn’t recover until it’s too late. Hardaway nails the clutch 3-pointer after spending most of the half on the bench.

5) Nik Stauskas seals the game with a dagger 3-pointer

After finding Hardaway for a big-time 3-pointer just a minute earlier, this time down the court Stauskas thought he’d make the shot himself. The freshman ends up benefiting off of what Beilein calls “residual action” off the screen-and-roll. Mitch McGary sets a great pick for Trey Burke way out beyond the 3-point line and completely takes Burke’s defender out of the play. Like off of any pick-and-roll, Burke is left to make the read after the pick is set. Burke is cut off from the drive at the free-throw line by AJ Hammons. Hammons recovers somewhat as McGary rolls, but Terone Johnson again finds himself in an awkward spot. Johnson helps off Stauskas to take away McGary as an option, only to have Burke find Stauskas open for the three. Purdue defended Michigan’s pick-and-roll action excellently — especially early in the second half — and on this play the Boilermakers again did a pretty outstanding job defensively. Hammons was especially great, taking away two options by stopping Burke and then recovering to McGary. In the end, a really good shooter ended up with an open, but contested, 3-pointer. With this make, Michigan essentially turned the game into a free-throw shooting contest. While the Wolverines weren’t quite out of the woods (see: DJ Byrd’s late 3-pointer), this shot went a long way toward securing the victory.