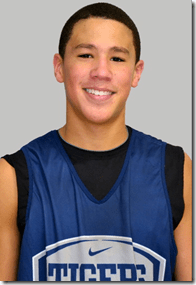 Sunday is not just Michigan’s biggest home game of the season, the Wolverines will also host their biggest recruiting day as well.

John Beilein and his staff plan to host both class of 2014 prospects with outstanding offers, Devin Booker and Trevon Bluiett, as well as the two 2014 targets that appear most likely to add a Michigan offer, Vince Edwards and Ricky Doyle.

Classs of 2015 point guard prospect Hyron Edwards is also expected to make the trek up from Northwest Indiana for Sunday’s game.

Booker’s visit to Ann Arbor will be his fifth unofficial visit in the last three weeks. He’s previously traveled to North Carolina, Duke, Florida and Michigan State (Thursday evening). Booker averaged 30 points ,seven rebounds and four assists per game in his junior season at Moss Point but his team was upset in the first round of the playoffs.

Booker added a coveted offered from Duke on his visit and recently blogged about his recruitment for USA Today. Here’s a snippet:

When we left me and my dad (Melvin Booker) were excited. He just kept saying, “Do you know what just happened? We were sitting there with Coach K!” He wasn’t as heavily recruited in high school so he always tells me that he’s just enjoying watching me go through this process. It’s a blessing.

The next day we went to the game and it was pretty crazy!

The fans definitely knew who I was and they were chanting my name so that was pretty crazy. It was a surreal moment for me. Everyone talks about their fans, but it’s even crazier in person.

Trevon Bluiett has been a frequent visitor at all three in-state schools, Indiana, Purdue and Butler, throughout the high school season. Most recently he visited Purdue on Wednesday for its game against Michigan. His weekend trip to Michigan will be his first unofficial visit to Ann Arbor for a game this season.

Bluiett scored 20 points in a 69-67 playoff loss to Broad Ripple as his Park Tudor team was unable to repeat as Class 2A champions in Indiana. Bluiett’s father and AAU coach, Reynardo, updated Trevon’s recruitment at Scout.com ($).

Vince Edwards has planned previous visits to Ann Arbor but has yet to make it due to scheduling concerns with his parents’ jobs. His prep coach, Josh Andrews, confirmed the visit to the Cincinnati Enquirer on Thursday. The message has long been that when Edwards visits Ann Arbor, he’ll receive an offer.

Purdue has long been considered a front runner for Edwards’s services but a visit to Ann Arbor and ensuing offer could be Michigan’s last shot to make a move in his recruitment.

Ricky Doyle missed significant time with a stress fracture in his foot this season but he’s a back to the basket big man that John Beilein absolutely loves.

Beilein has been down to watch Doyle play several times this season and the big man is drawing interest from the likes of Notre Dame, Miami, Ohio State, Penn State, Boston College, Georgia and Alabama along with Michigan. Don’t be surprised if Doyle adds a Michigan offer before the weekend is over.

Hyron Edwards had a solid sophomore season for East Chicago although his team went just 10-11 on the season. Edwards is one of the top point guard prospects in the class of 2015 and visited Michigan twice over the summer. Here’s a highlight film of Edwards in action over the last year.